On 20 March 1999 the new bell was dedicated and the existing bells were re-dedicated.

The ‘St Hilary 2000’ community association had funded the bell and the restoration of the existing bells. 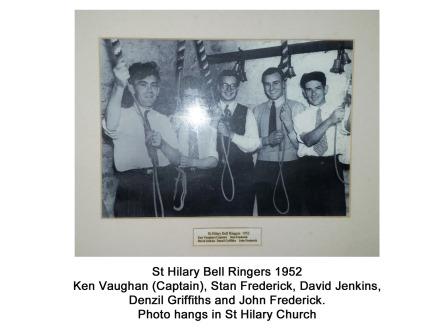 The fine 14th Century tower of St Hilary church has housed bells since at least 1734 when Abraham Rudhall cast 4 bells, two of which are still extant. Interestingly, these bells were recorded as last being rung at the re-opening of the church in 1862, following a major re-ordering by George Gilbert Scott[1],

The Cardiff and Merthyr Guardian of 10 May 1862 reported that: ‘the church was re-opened for divine service last Friday week. The weather was exceedingly fine, and it was evident on approaching the pleasant village of St Hilary, that a lively interest filled the beasts of the inhabitants. The bells rung peals from early morning and at intervals throughout the day, and flags, which were kindly lent for the purpose by Captain Dornford, R.N, of Cardiff, decorated the tower’.

20 March 1999 saw the completion of Taylor’s scheme begun in 1906, with the installation of a treble bell to mark the beginning of the Christian Millennium and a service to dedicate the new St Hilary bell by the Archbishop of Wales.