The information below is taken from St Hilary 2000 newsletters. The newsletters were established around January 1998 and continued until around April 2002.

On 17 January 1997 a Millenium Committee was established to plan village celebrations.

Members of the committee were

At the meeting it was reported that there was £700 in the St Hilary 900 account and it was agreed that this money should be used to maintain the group. It was also reported that "No Man’s Land", later named the Pump Garden" was the responsibility of the Vale of Glamorgan Council.

Proposals put forward by the community for St Hilary 2000 included:

Sub committees were formed for the first three proposals:

A series of fundraising events were organised, which included a safari supper, quiz night and cricket match. The match, St Hilary against St Mary Church, did not take place because of the Princess Diana’s funeral. A trip to the House of Commons took place on 25 November

One of the fundraising activities that was suggested was a takeaway quiz. Quiz sheets were to be offered to villagers, who were encouraged to sell them onto friends. The cost of the sheet was £1. Mark Hitchcock also agreed to sell them at the Bush.

Following the success of the safari supper in 1997another one was arranged for Friday 28 August.

On Wednesday 25 November 41 people travelled to the Houses of Parliament. There was a large crowd gathered outside when they arrived because the House of Lords was sitting and about to pronounce their decision on the fate of Mr Pinochet. Because of this a full tour wasn’t possible but the group was able to see the House of Commons in action. Vale MP John Smith greeted the group and took them to one of the committee rooms at the end of the session to explain some of the interesting bits of gossip on the running of the House.

The groundwork for the St Hilary book was underway and there were plans to interview some of the villagers whose families have lived in the village for a number of years. Research into village millennium signs was also underway.

A number of new residents were welcomed to the village that year:

Fundraising continued and following the success of the 1998 takeway quiz another one was prepared for the winter of 1999.

A quiz night was held on 14 May expertly led by Dermot and Carolyn Lyons. There were liquid refreshments and a hot snack available at half time

In April 1998 the Millennium committee approved the application for the extra bell in St Hilary church tower. It was estimated that £12,000-£14,000 was required. Applications to a number of charities were successful, raising around £3,000, and the Llandaff and Monmouthshire Association of bell ringers provided substantial funds for the project.

On Saturday 20 March the Archbishop of Wales dedicated the new St Hilary Church bell . The bell was cast at Taylors bellfounders in Loughborough. A few villagers and bell ringers visited the foundry. Maintenance work associated with the installation of the bell which was completed on 21 July 1998.

The bell was inscribed with the following: to the glory of God, the St Hilary 2000 Community Jubilee Bell.

On 31 December 1999 a dinner and disco run by Chris Dennis was held at the Bush Inn to celebrate the New Year. At midnight a band of bell ringers rang in the New Year.

The Bush Inn was exclusively made available to villagers by Mark Hitchcock. Tickets cost £30 per person (£5 for those villagers born prior to 1926). This included a bottle of champagne for every two people.  The low cost was because a number of volunteers offered to cook the meal.

Local bellringers rang the new year in at midnight,

Villager Gill Harris commented: Mark Hitchcock allowed us to use pub and kitchen as though it was ours - Jane Kemp was involved on the committee, Mary and I - can’t remember who else - it was 18 years ago????   All I can remember was black tie, kids came down at midnight, we were all outside, I do remember Trevor Llewellyn having a good night, think we made beef wellington and salmon as alternative for main course. I do hope someone has photographic evidence as it was a momentous occasion, I think we rang the millennium bell at midnight. 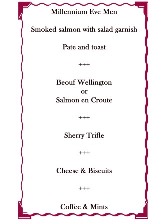 Villagers were given a gift of champagne flutes to mark the occasion.

On Friday 19 May a quiz night was held in the village hall.

The 19 May quiz night was to be the finale to St Hilary 2000 but due to overwhelming demand another safari supper was held on 2 September.

From 1 to 4 June a Flower Festival was held in the Church - click here to see the photographs and newspaper articles.  The money raised was given for the upkeep of the church.

St Hilary: A History of the Place and its People

Heritage Lottery funding of £5,000 was secured to fund the St Hilary book - entitled St Hilary:a history of the place and its people. The book charts the events of the village over 900 years. It won a special prize of £500 awarded by the Glamorgan County Historical Trust. The cover price of the book was £12 but villagers could purchase it at a concessionary rate of £10.

Copies were sent to all primary schools in the Vale of Glamorgan and Cardiff and local libraries. 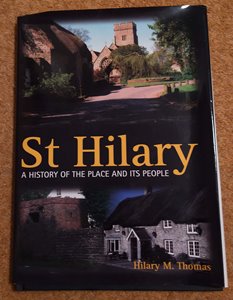 In September 2000 the Millennium Committee stated that they were concluding their activities. There was £3,600 left in the bank account and the potential to raise a further £4,000 from the sale of the book. A suggestion was made to assist the village hall with some renovation as it was looking rather tired. There were already moves afoot to raise grants for this and plans had already been prepared that would involve spending £20,000 - £25,000. The Vale of Glamorgan Council had promised £5,000 and a lottery bid was being prepared. 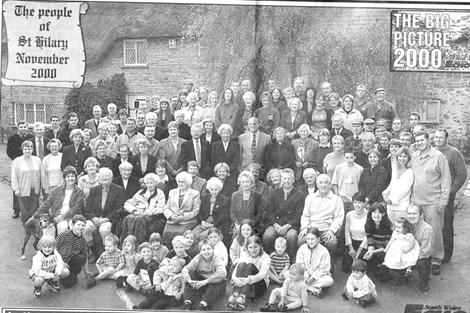 On 24 November 2000 a village meeting was held to discuss how the money left in the St Hilary 2000 account (approx £3,700 plus future sales of the book) should be spent.

The following proposals were discussed:
• Village hall refurbishment
• Investment of money – interest then could be used to keep the village tidy
• Purchase of a sit on mower to maintain the village green and church yard by villagers; landscaping of the green with a mature oak tree planted
• Arts and music festival
• Community play area for children

A vote revealed that the following would be priorities:
• Village hall refurbishment
• Books to be given to school children
• Village green maintenance
• Arts and music festival
• Investment of money
• Community play area for children

On 15 July 2001 there was a garden luncheon at the Cottage in aid of the building and church funds.  A funding application was made to the Community Fund (Wales Lottery)

In 2001 the village had the opportunity to have a mains gas supply. It never materialised because it was too expensive.

On Monday 3 June there were Golden Jubilee celebrations on the village green.Llanfair Community Council supported it with £150.

Funding was being sought to refurbish the village hall.

Future fundraising was discussed and a suggestioon was made for a film night. A recent inspection showed that the ceiling was too low and the Chair of the committee was of the view that sitting watching a film would not necessarily be a good community evening. It would be difficult to find a film to suit everyone.

Refurbishment of the village hall was underway under the supervision of the Villge Hall Committee.

A meeting was held in August 2013 to discuss the closing of St Hilary 900 accounts.
Those present included: John Coggins (formerly the Orchard), Bill Clay, Jeannie Griffiths (formerly Little Hall Cottage) Oscar Ackerman, Graeme Kitchen, Monica Dennis, Jill Williams, Jenny Lord.
It was agreed that the money should be spent on No Man’s Land (Pump Garden) to create a new fence, provide a gate and generally tidy up the area. Jill Williams oversaw the work