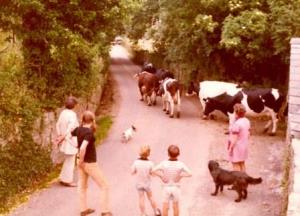 There are no prehistoric remains St Hilary although there is plenty of evidence in adjoining villages of early settlement. Likewise, despite the location close to the old Roman road which connected Gloucester to Neath (the modern A48), no Roman remains have been found.

The more recent history of the village appears to start with the Anglo-Norman subjugation of the Vale of Glamorgan which was carried out by the Norman baron Robert Fitzhamon. Using Cardiff as his base, he established castles and manors across the Vale, the first lord of the manor of St. Hilary probably being a member of the de Cardiff family who established a 12th century castle at Llantrithyd

The earliest documentary evidence for St. Hilary dates to 1119 AD with the recording of Bishop Urban of Llandaff’s claim that St. Hilary fell within the possessions of his see. It is possible that a church and settlement existed some considerable time before this, but there is no evidence for any earlier buildings although archaeological investigation might change this view. Meanwhile, the church retains some possibly 12th or 13th century features although rebuilding may have taken place in the 1230s after the rebellious Welsh apparently burnt both St. Nicholas and St. Hilary to the ground.

Sometime in the 13th century the Bassets succeeded the de Cardiffs as lords of the manor of St. Hilary and by 1300 a mansion (Old Beaupre) had been built on the edge of the river Thaw valley close to St. Hilary. This stood to the south of the 16th century house, which still stands although now a ruin. This house, with its mixture of medieval and Elizabethan features, epitomised the affluence and prominence of the Basset family at the time. Of note is the outer gatehouse with its decorated porch of 1586 and the magnificent inner porch of c1600. Whilst the Bassets invested heavily in Beaupre, they also had estates in Gloucestershire and Somerset, so the management of St. Hilary manor was often left in the hands of stewards.

The Bassets and the Beaupre Estate (16th to 17th centuries)

During the 16th and 17th century the Bassets took an active role in the official life of the county, six of them serving as Sheriffs during this period. However, the family’s support of the Royalist cause in the Civil War in the 1640s led to financial ruin, and after a period of retrenchment the family estates in Beaupre (including the manor of St. Hilary) and Llanblethian were sold in 1709 to Christopher Brewster. In 1755, by which time the mansion at Beaupre was only partially occupied by a tenant farmer, the estate was purchased by Thomas Edmondes of Cowbridge who considered the old house too ruinous for his purposes and who built a new prestigious house in the village for himself and his family, The Manor House (now a Nursing Home).

Whilst the major land-owning families can be traced from the medieval period onwards members of the wider community of St Hilary are rarely identifiable before the 18th century.

The total population of the parish at the end of the 17th century was 150. Many of the families would have spoken Welsh as their first language.

Few individuals would have received any formal education but there is evidence that a small school was being constructed for poor children in St Hilary under the auspices of a charitable trust. The St Hilary school, with its 10 pupils (in 1678), was the smallest in the county.

Llewellyn Traherne and his sister sold off the Beaupre part of the estate in 1797 to Daniel Jones. He was a wealthy solicitor who endowed Cardiff Royal Infirmary and although married, he died childless in 1841, leaving Beaupre to Richard Basset, thereby re-establishing the link with the Basset family. Richard Basset soon took up residence in New Beaupre, the house built by Daniel Jones a short distance from the old ancestral mansion. After Richard Basset’s early death at fifty one, the property passed to his wife then to his nephew, Major William Bruce, who later assumed the name of Basset. The Bassets, Trahernes and Edmondeses all retained links with St. Hilary until well into the 20th century, although the major landowners were the Bassets and the Saundersons, relatives of the Trahernes.

In 1865 the church was restored by the great church architect, Sir George Gilbert Scott, the work being largely paid for by Charlotte, widow of the Reverend J M Traherne, who had died in 1860. A large new vicarage, now called The Grange, was provided on the western edge of the village in 1875. Throughout the 19th century the village remained dependent on its agricultural produce for income, the largest farm, called Village Farm and comprising 600 acres, being located within the village boundary. The tenants were the Thomas family who also rented part of the Beaupre estate. A small school for poor children was supported in the 1830s and 1840s by the Traherne family and in 1856 a National School was established in a building next to the church. The Cowbridge and Aberthaw Railway opened in 1892 and, although originally intended for fright transport, subsequently carried passengers and introduced steam railcars or ‘motor cars’ on the line.

Throughout the 19th century St Hilary changed little from the small rural community it had always been.  The majority of its inhabitants derived their income from agriculture and associated trades. Cottages provided homes for agricultural labourers, blacksmiths and wheelwrights, thatchers, carpenters and masons, whose skills were essential in the rural economy. Most of the cottages would have been ‘two up and two down’ and would have accommodated large families.

In 1905 a passenger platform, or holt, was provided in St Hilary close to Old Beaupre.  The holt was closed to passengers in 1920, the same month that the first daily bus service between Cardiff and Cowbridge was inaugurated.

In 1909 the Beaupre Estate was put up for sale, including New Beaupre which was then let to a Colonel Quin. The effect of Lloyd George’s ‘People’s Budget’, which had tax implications for the wealthy, may have deterred prospective purchasers and in the end only small sections of the estate were disposed of, the Basset family retaining possession of the rest until the 1930s.

The village school closed in 1910.

Like every other parish in the Vale, St Hilary saw it men march off to war in 1914-1918.  A memorial plaque in the church lych-gate names those who returned home.  Memorials within the church remember the fallen.  New Beaupre, like many other large houses in the county, was used as a military convalescent hospital during the Great War.  Click here for the story of the New Beaupre Hospital. A simple obelisk erected on St Hilary Down in 1922 commemorates the men of the Glamorganshire Yeomanry.

The 19th century pig sty still remains within the garden of Church Cottage opposite the Bush Inn, a typical conical Glamorgan pigsty of circular plan. It is of limestone rubble construction with conical roof rising to approximately 2m. The remains of a pig pen are still evident with a stile within a low rubble wall bisected by a small flight of steps leading from front of house to rear with a feeding trough set against the flank wall of the house.

There is a brick and concrete pill box of 1940s design. Sited on the corner of village (on the boundary of Village farm) controlling access from the road to the South.

Village Farm used to be an estate of 600 acres.

Manor Cottage was the first home of the post office; it moved to Tyr Eglwys, now known as Abbotswood.

J C “Johnnie Clay” is a legend in cricketing history.  His career spanned over a quarter of a century.  He captained Glamorgan from 1924-27 and in 1946 established batting and bowling records that stood unchallenged for many years.  He died in 1973 and is buried in the church grounds.

The above information is taken from two sources: