The Manor House and its links to Verlands House, Cowbridge

The Manor House is currently a nursing home but it has an extensive past history.

In the 1840s, Rev. John Montgomery Traherne was lord of the manor of St Hilary, which his mother’s family purchased in the year 1758.

Elizabeth never married. She lived and died (11 September 2005) at Manor Piece, St Hilary - this is a link to an article about Ackland Allen and Giles family.

The Williams family moved to the Manor House from the Verlands in 1965. The porch on Manor House was originally on Verlands House off Town Mill Rd in Cowbridge which was demolished to make way for an estate of houses.

Verlands House was built in the early years of the 19th Century by the Rev Evan Morgan of Cheltenham. Around 1838 the occupant was Thomas Llewellyn, then a farmer of some 300 acres, but when he retired to live in Eastgate he was described as a ’banker, landed proprietor, town magistrate, alderman and retired corn merchant’. He was certainly one of the important personages of Cowbridge, and in fact The Verlands attracted the crachach of the town throughout its history. Among these was James Ballard of the Bear Hotel, who followed Llewellyn – and Ballard was a leading agriculturalist, famed for horse-breeding. Thomas John, a solicitor and a member of a Rhondda brewing family, occupied the house in the early 20th Century. The Johns had an opulent lifestyle; they had two Daimlers, and the chauffeur regularly drove Mrs John to the Dorothy Cafe in Cardiff just to buy half a dozen cakes. The last owner and inhabitant of the house was another solicitor, Mr Lew Williams.

L E W Williams was the solicitor for the Archdiocese and following his marriage in 1933, took up the tenure of the Verlands. He bought Verlands in 1951 His six children were all born there. Two of the children, Rose Morgan and Laurie Williams, still attend St Cadoc’s, as did their late brother, Steve, the father of Simon Williams.

In 1939 there were only five Catholics in Cowbridge, apart from the Williams family of Verlands. Mass was celebrated in the Blue Bell Inn (now Filco supermarket) once a month by Fr Meyrick from Bridgend. The owner of the Blue Bell Inn gave the Stations of the Cross that now hang in the church. Soon after the first Llantwit church was opened in 1950, Mr L E W Williams offered the Archdiocese a plot of land in the field fronting Verlands for a church to be built for the growing number of Catholics in the Cowbridge area. Building began on St Cadoc’s in 1955 and following completion it was dedicated by Archbishop McGrath on 29th January 1956. Following the service, lunch was held at Verlands, the Williams’ family home.

When the Williams family moved to St Hilary in 1965, the house and grounds were sold to Louis Fisher, builder of Cowbridge, who demolished the house and built The Verlands estate behind the church, with the work beginning at Christmas 1965. 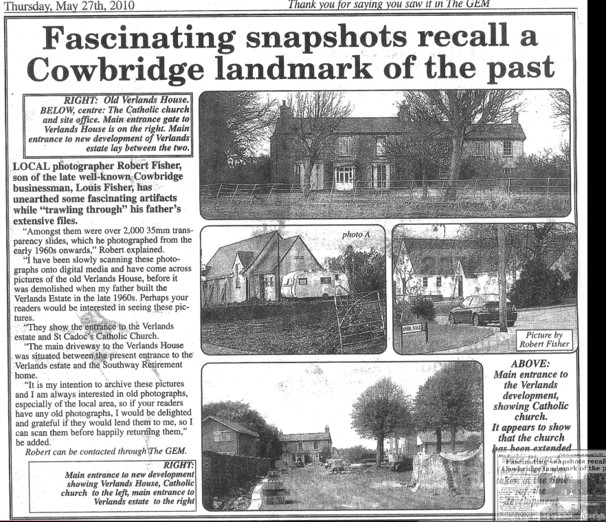