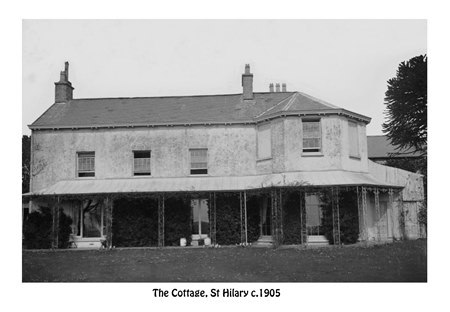 The Cottage was first owned by the Franklin family, who were from Clemenstone. Thomas Mansel Franklen (Barrister) died in 1928 and his wife Mary Caroline Florence Allen passed away, aged 88 years, in 1938.

The Cottage was subsequently purchased by the Clay family from Boverton House. They moved in 1939 after some renovation work had been carried out. Here is the link to the story of the Clays.

The Clay family bought the Lodge from the Bruce family at the Grange. Howard Jones, who still lives in the village was brought up at the Lodge. Cyril Griffiths moved there when Mrs Clay sold the Cottage.

Mrs Mary Clay (Bill and Glynne’s mother) sold Woodlands (now Stable Cottage) which used to be the stables of the Cottage. She also built Pinklands which is next to the Cottage and behind the Lodge.

Following the sale of the Cottage by the Clays, Cliff Phillips (vet) moved in. He was granted planning permission for a house to be built on a portion of the back lawn at the Cottage that had once been tennis courts. He sold this land to the Johnsons who built Tumbler’s Chase. After he was widowed, Mr Johnson moved temporarily to London but then moved back to the village and lived in Abbotswood.

John and Fiona Curteis moved into The Cottage after Mr Phillips. Once again it needed renovation before it could be occupied. Click here to read the obituary of John Curteis.