Bruce Family of The Grange

West of St Hilary Church is the 1875 vicarage, now known as the Grange, currently owned by Isobelle and Peter Lowe. Previously, it was the home of Sir Gerald Trevor Knight Bruce who was a solicitor in the firm of Morgan Bruce & Nicholas.

Sir Gerald Bruce was a well-known figure in South Wales over decades and included in his many achievements chairmanship of Wales and Monmouthshire Industrial Estates Ltd, an organisation which contributed significantly to the economic recovery of Wales following the depression of the thirties. Sir Gerald Bruce was Lord Lieutenant 1943 -1952.

Lady Lilian Bruce officially opened the Village Hall in 1930 and was the first President of the St Hilary WI when it was established in 1932.

Gerald Bruce’ son Major-General John Geoffrey Bruce  (4 December 1896 – 31 January 1972)  was an officer in the British Indian Army, eventually becoming Deputy Chief of General Staff, although he is best remembered for his participation in the 1922 British Mount Everest expedition. Bruce, who had never before climbed a mountain, had been appointed as a transport officer, but chance led to him accompanying George Finch on the only summit attempt that used supplemental oxygen. In 1922 they set a new mountaineering world record height of 8,300 metres (27,300 ft), only 520 metres (1,700 ft) below the summit of Mount Everest. The expedition was led by his cousin Charles Granville Bruce, the youngest son of Lord Aberdare, who also led Mallory’s attempt on Everest in 1924[i].

During the First World War, Bruce was second lieutenant in the Glamorgan Yeomanry serving in Egypt and Palestine. As an officer of the British Indian Army, Bruce took part in the Third Anglo-Afghan War of 1919, and in 1921 he was awarded the Military Cross.  He participated in the North-West Frontier Province operations between 1920 and 1923, and again between 1937 and 1938 Bruce was promoted to commander of the 2nd Battalion 6th Gurkha Rifles in 1937. He had a distinguished career during the Second World War, serving in Norway and France in 1940, before returning to India to command the 17th Indian Infantry Brigade at the time of its formation. From 1944 to 1946 he was Deputy Chief of General Staff of the British Indian Army, and was then General Officer Commanding Lahore District until his retirement in 1948. He was commandant of the Civil Defence Staff College from 1952 to 1956[ii].

Peter Davies contacted us in 2020 and told us that his family lived in the Grange in the 1960s. David Llewellyn Davies died in 1976. Following his death, wife Jessie sold the Grange. The family owned a ‘pop’ business in the valleys and they often held coffee mornings to raise money for charity. 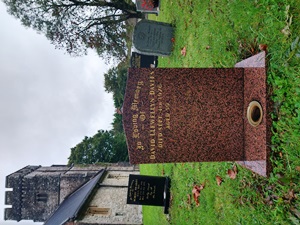