St Hilary has featured on many TV programmes

The most famouse was BBC's Hound of the Baskervilles Sherlock episode.  Benedict Cumberbatch and Martin Freeman began filimng the second series of Sherlock in St Hilary on 16 May 2011.  The episode was broadcst in early 2012. This is the link to a Wales OnLine article about the filming. 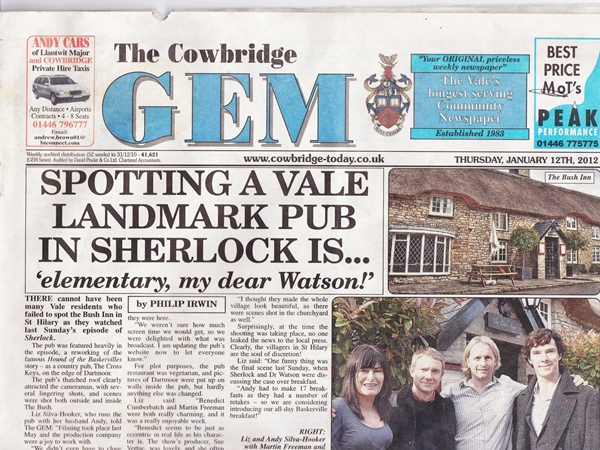 Rory McGrath ("They think it's all over") and Paddy McGuiness ("Phoenix Nights") were at the Bush on 26 August 2009 filming the second series of "Rory and Paddy's Even Greater British Adventure".  The programme was shown on Channel 5 at 9pm on Monday, 27 September.

The opening scenes of S4C's 35 Diwrnod aired in April 2010 - it’s available on the BBC iPlayer
www.bbc.co.uk/iplayer/episode/p089cmq8