The challenge launched in the spring to grow sunflowers has been amazing with some impressive specimens revealed!

The Pitman’s flowers – swaying around in the breeze in the front garden of their house reached 2.5 metres 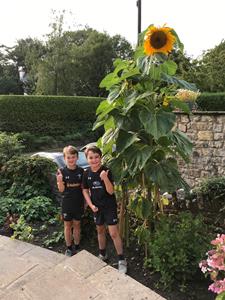 But Caroline Neudegg must be the winner of the largest flower head – it is enormous (29cm diameter and 120cm circumference) - and she has been challenged to count the seeds! 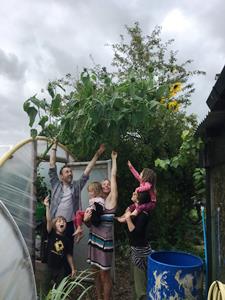 Gill Clay sent a photo and reported that it was grown for her garden by their son, Rawley & Nan's, children, Zephyr (5) & Frida Mary (almost 3). She reported that it was 148.2 cms, almost as tall as Gill (160.2cms) and it is carrying 5 flowers in bloom and another bud and one which has gone over. “It will be great for our garden birds when the seeds have set!” 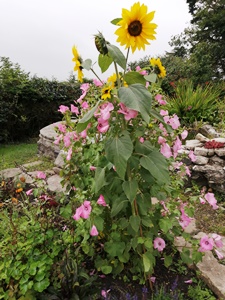 Gill said that it was “a wonderful story of a courageous sunflower! They gave us another which disappeared and was found in the fish-pond (where it had been waiting to be watered and had obviously fallen in!) and then after it had been planted and was growing nicely, our dog chewed its stem completely through. I thought it had had it, but didn't dig it up and now after all it's adventures, it's growing again and is about 40cms high with a bud at the top!”

Amelie is pictured with a wonderful tall sunflower too…. 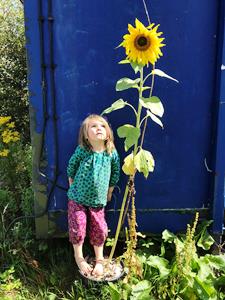 Jayne Warnock, along with Liz Loch have grown some striking sunflowers. And Monica’s grew to a height of 8 feet

Looking to the past, sunflower growing seems to be somewhat of a tradition in the village. The late Roy Price (Crescent) grew a magnificent sunflower in 2004. 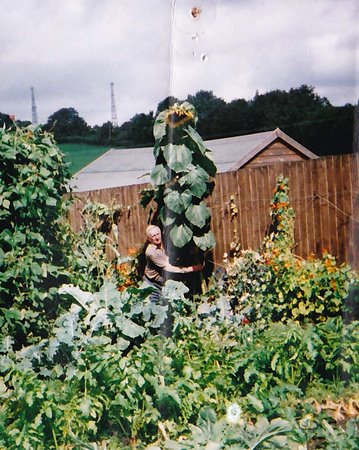 And Adrian Kitchen (Old Post Office) grew an impressive collection of stately sunflowers in the 1980s. 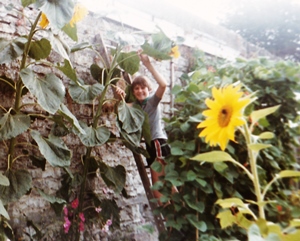