We have always known that St Hilary is a great place - but now it's fact. 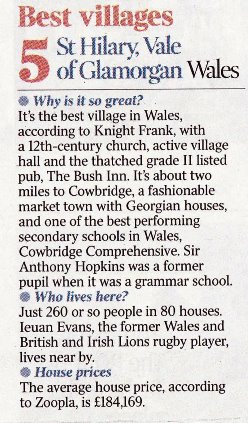 According to the Times on 10 March 2015, St Hilary is the best village to live in the UK, number 5 in the best places to live in the UK and the best in Wales. (Though the paper seems to have missed a zero off the average house price.)  And we also made WalesOnLine.  Well deserved fame!

St Hilary is often in the news for being a special place to live.

On 15 November the Western Mail named St Hilary as the most expensive place to buy a home in Wales.  It reported that:

Llantrithyd Road, which winds through St Hilary, is the nation’s most expensive residential street, with each property carrying an average price tag of more than £750,000.  Sarah Dent, 46, who lives on Llantrithyd Road, has brought up her three children Rebecca, 18, Rosie, 14, and William, 13, there, with husband Colin, a Professor of Orthopedics.  She said: “We moved here about 12 years ago from St Nicholas, in the Vale, and we love it here.  “It’s a nice local village. There is a great community spirit that is mainly focused at the Bush Inn pub."

The village boasts the AA 2008-09 pub of the year, the Bush Inn, popular for its food dishes, and a luxurious home for the elderly, The Manor House.

The figures from the Land Registry are based on transactions between 2004 and 2008. One property on the market in St Hilary for £795,000, is described by propertyfinder.com as “a beautifully presented five-bedroom grade II listed ‘chocolate box’ cottage located within the hugely popular and charming village of St Hilary”. 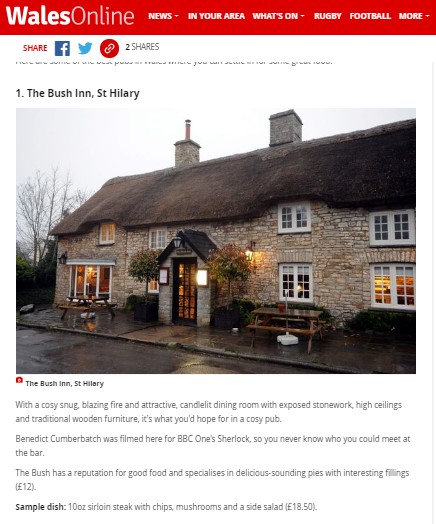 On 17 May 2015 Wales Online rated the Bush as number 1 in its list of brilliant Welsh food pubs where you can enjoy a decent pint and a great meal.