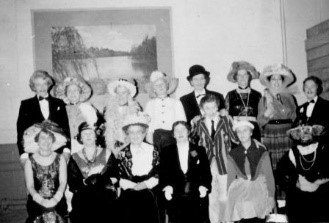 Here's the history of St Hilary WI which was written to celebrate its Golden Jubilee – from its inception in 1932 to 1982.

28 members were enrolled when it opened

At the first meeting the demonstration was ‘sea grass seating for stools’. The competition was for the best 1lb pot of marmalade and the winner was Mrs May Llewellyn for whom it proved to be the first of many successful competitions. The subsequent demonstrations and talks have encompassed the whole spectrum of subjects in infinite variety. A few are worth of mention.

These talks are a far cry from the most recent on microwave ovens and the silicone chip.

In the 1930s much effort was afforded to charities.

During several years there were competitions for growing the most potatoes from six seed potatoes. In one such competition the winner grew thirty three and a half pounds and the total from members weighed three and a half hundredweights. They were given to the Bridgend and District hospital. There were egg collections for the Children’s Homes and fund raising Whist Drives and Bring and Buys resulting in contributions to Cowbridge and District Nursing Association, Red Cross, Cardiff Royal Infirmary to mention some of the beneficiaries.

This work was continued during the war.

Working parties were formed and met weekly to knit comforts for the troops. Hundred weights of wool were knitted in navy, air force blue, khaki and sea boot stocking wool.
Another working party formed a ‘preservation centre’ in the Village Hall using as much as 5cwt of sugar to preserve jam and chutney from fruits and vegetables from member’s gardens and blackberries, hips and crab apples from the hedgerows for the same purpose.

Blackout curtains were made for the Village Hall windows and the Institute organised the placing of evacuee children in village homes. Monthly whist drives and dances throughout the war enabled donations to be made to the many charities – the W.I cot at Queen Charlotte’s Hospital, Mission to Merchant Seamen, Salute Soldier Week, Glamorgan Forces Comfort Club, Mrs Churchill’s Aid to Russia, Prisoners of War, YMCA, Welcome Home Fund for the villagers in the forces. One WI member served in the WAAF.

St Hilary WI has taken part successfully in Drama and Dance Festivals, Produce Shows at County level, winning the Countess of Plymouth Cup in 1950, singing festivals and competitions and the Penllyn cup at Cowbridge show in 1980. It has organised fetes and bazaars, attended half yearly and annual Council and group meetings, entered a scrap book in the Architectural Year competition, competed in two radio 2 quiz programmes, served in the Hensol hospital canteen and at the W.I market in Cowbridge.

Members have attended Denman College, participated in church yard surveys and subscribe annually to LEPRA for the treatment of children in India.

It is an interesting fact that over 50 years there have been only four presidents, two in the first two years. Miss Dorothy Ackland-Allen JP who presided from 1933 to 1963, VCO and sometime county chairman guided St Hilary W.I in the way in which it should go, and due to the fact the succeeding president – Mrs Sarah Sweet 1963 – 1976 filled her office in the same admirable way and so on to Mrs Sweet’s successor – her daughter Mrs Molly Ranger, who has kept the continuity.

In recent years the membership has grown and flourished with members enjoying monthly meetings and outings organised by the Glamorgan Federation.

To celebrate the Centenary Year of the Women's Institute, St Hilary WI planted an acer tree on No Man's Land on 16 September 2015 - the date in 1915 that the first WI was founded in Llanfair PG. Members gathered for a ceremonial planting, complete with commemoration plaque. A celebratory toast then took place in The Bush. Sadly, the tree did not survive and had to be replaced in October 2019 when a Rowan tree was planted.  Click here for more details.

In June 2009 Elgiva Thomas, a long-time former resident of the village, celebrated her 90th birthday. The event was celebrated by St Hilary WI - Elgiva had been a member for 73 years. 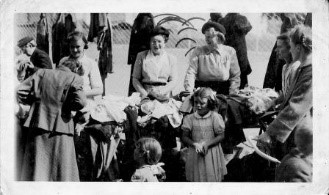 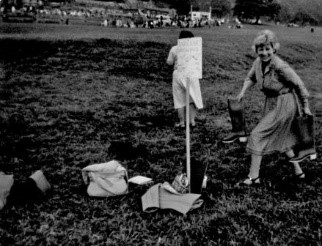 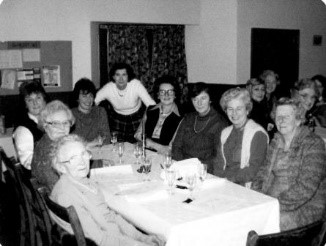 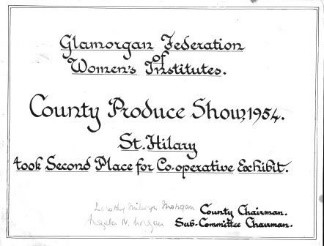 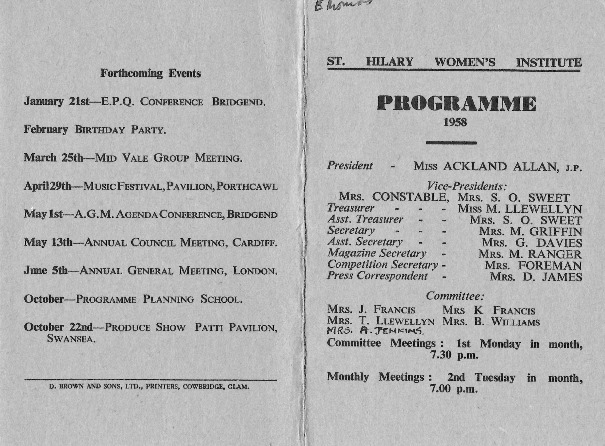 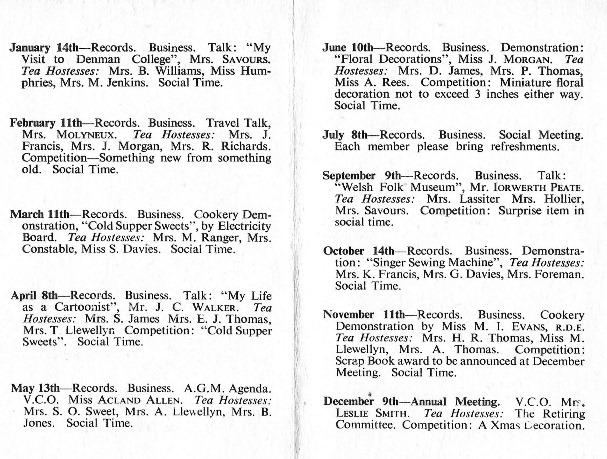 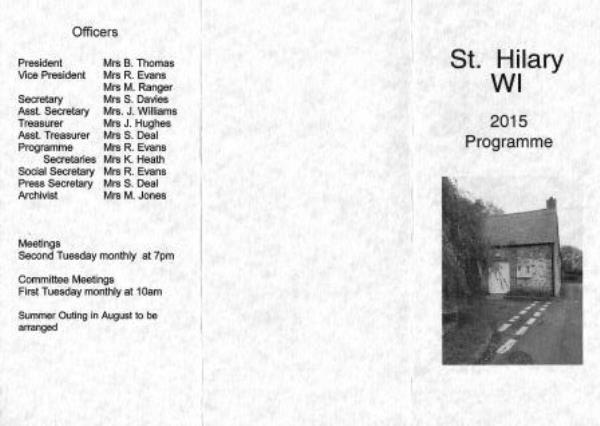 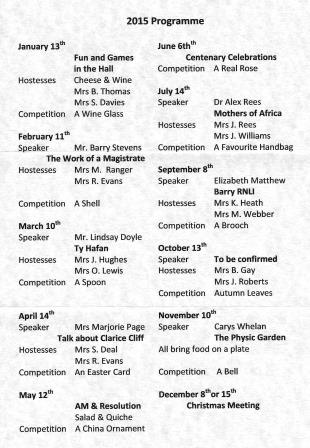 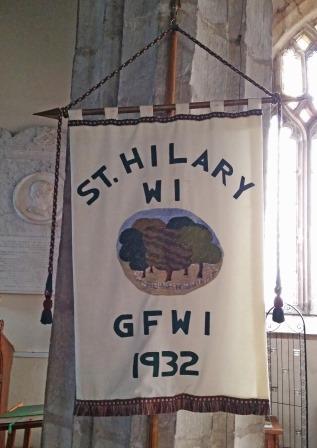 Celebrating the Centenary of the WI (16 September 2015) 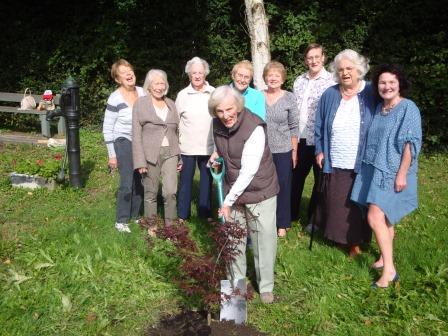 To celebrate the Centenary Year of the Women's Institute, St Hilary WI planted an acer tree in the St Hilary Pump Garden / No Man's Land on 16th September 2015 - the date in 1915 that the first WI was founded in Llanfair PG.  Members gathered for a ceremonial planting, complete with commemoration plaque.  A celebratory toast then took place in The Bush!! 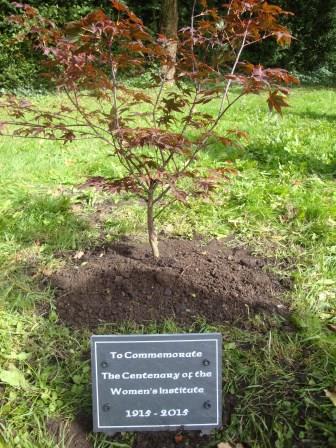 The original tree failed to thrive, so on 1 October 2019 a replacement tree was planted with the help of Ewart Schofield: 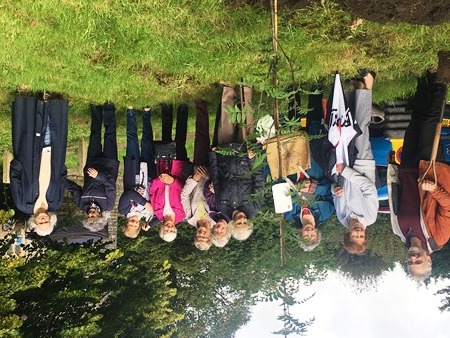 St Hilary WI
Western Mail: Thursday 19 April 1934
ST. HILARY There was a good attendance at the last meeting of the St. Hilary (Glamorgan) Women's Institute. In the absence of Miss Allen, who is abroad, the chair was taken by Mrs. R. Morgan. A demonstration of wool embroidery was given by Miss James. Mrs. Jones, who brought the garments made by members for the Personal Service League, had cut out all the garments and distributed the wool, and about 40 were made. A competition was organised by Mrs. Harding. Members are looking forward to attending the group meeting at Cardiff on April 26. Miss S. A. Davies (hon. secretary) will attend the annual meeting in London as delegate.

Glamorgan Gazette, Friday 31 October 1947
Vale of Glamorgan Group of Woman's Institutes The autumn meeting was held on Friday in St. Hilary Village Hall. St Hilary was the hostess Institute and their president, Dorothy Ackland Allen, J.P., took the chair. Every institute in the group was represented: St. Hilary. St. Athan, St. Nicholas, Llantwit Major. Cowbridge and Llanharry - a newly-formed institute, who received a hearty welcome from the chairman and every other member. After the Group convener (Mrs. Owen Phillips, of Cowbridge); had given a report of last - Spring's meeting and Mrs. J. T. Morgan, of St. Nicholas, had given notice of the forthcoming events in the Women's Institutes of Glamorgan. the Chairman introduced and welcomed Mrs. Dapho Powell, of Bridgend. who gave a very interesting and instructive talk on "Women and their Position the State." outlining the emancipation of women since the, First World War. Refreshments were served by members of St, Hilary Women's Institute. everyone having brought her own share be pooled. Then followed the radio genie of "Twenty Questions." with Miss Ackland Allen as the question master, and the "experts" being made up of one volunteer front each Institute. As there was still a little time in hand everyone joined in community singing. conducted by Mrs. Rhoderick (Cowbridge) and accompanied by Miss Pat Morris. Votes of thanks then followed, and the meeting closed with the singing of the Welsh National Anthem.