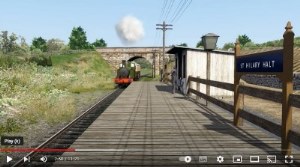 This is the link to a fascinating CGI simulation of a train on the Cowbridge - Aberthaw railway line: https://youtu.be/VUtVu2CX4_8

The train arrives at St Hilary Halt at about 2:50 into the film - the halt was closed to passengers in 1920, the same month of the first daily bus service between Cardiff and Cowbridge.

Cowbridge railway station served the town of Cowbridge from 1865 to 1965. It opened along with the line on 30 January 1865 after multiple delays, which the engineer of the line blamed on bad weather. It was the biggest station on the Llantrisant-Aberthaw line.

The prospectus for the Cowbridge Railway was published in 1861 and the first train ran between Llantrisant, at the junction of the South Wales Railway, and Cowbridge. It was a little over 5 miles long, beginning at a junction with the South Wales Railway, near Llantrisant station and terminating at the eastern end of Cowbridge. The railway passed through sparsely populated agricultural countryside with initially just one intermediate station at Ystradowen which was a small hamlet.

In the same year that the prospectus for the Cowbridge railway was published the Taff Vale Railway received Parliamentary approval for a new line beginning near Llantrisant station and ending at a junction with its main line just south of Treforest. Once both these plans were fulfilled, they provided a railway route from Cowbridge to the Rhondda, Aberdare and Merthyr valleys via Llantrisant, Treforest and Pontypridd.

In 1875, low revenues, high operating costs and a precarious balance sheet led to the operation of the Cowbridge Railway being taken over by its much larger neighbour, the Taff Vale Railway Company. Passenger services to Cowbridge continued until 1951 and goods traffic ended in 1965, except for about 1.5 miles of track, which linked the iron ore mine at Llanharry with the South Wales main line, until the mine closed in 1975.

The St Hilary station was one of four 'platforms' opened on the branch to cater for the new rail motor service. Like the others, St Hilary Platform had a single 40-foot platform, which was without a shelter. Passengers were confined to a fenced enclosure at the rear, which was unlocked by the train conductor when the train arrived. This layout was never altered. The station was not conveniently situated for the village. It was a considerable distance away, and passengers travelling from the station to the village had to climb a steep hill. The station was never a successful undertaking. It closed on 12 July 1920.

Here is the link to more photographs and articles about the railway on People's Collection Wales:  https://www.peoplescollection.wales/collections/1293016