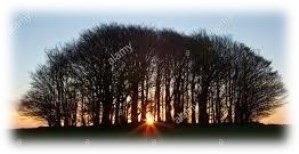 Here's the story of the Clump (or more accurately Bryn Owain, meaning Owain's Hill), including the battle of Stalling Down, which was part of was part of the Glyndwr Rising, the Beacon ceremonies, gory executions and fireworks!

The Clump appears to have a colourful history. It is reputed that the Battle of Stalling Down took place in the late autumn or early winter of 1403, between the supporters of the Welsh leader Owain Glyndwr and those of King Henry IV of England. It was part of the Glynd?r Rising or Welsh Revolt of 1400-1415.

The exact site of the battle and the precise details of the action are not known. The general site is known locally as Bryn Owain, meaning Owain's Hill. The site was known as Stallington, evolving to Stalling Down. A Roman road runs over the hill as it traverses the area and would have been a convenient route for moving a very large army along for the English[i].

There is a view that the Clump of trees on the St Hilary side of the downs, was for a period, a location for public hangings. However, an article in the Cowbridge Record Society newsletter (October 2004) challenges this view.

It says that, in 1768 judges decided to transfer the Great Sessions for Glamorgan from their traditional meeting place in Cardiff to the Town Hall in Cowbridge. However, these sessions, held twice yearly in April and August lasted only 20 years in Cowbridge. In 1788 they were transferred back to Cardiff. At these great sessions judges had the power to pass a death sentence. And, the sentences were carried out in the nearest open space – the Stalling Down.

Only six people (all of them men) were executed by hanging during the 20 years (1768-1788) that the Great Sessions for Glamorgan were held in Cowbridge. At least ten others were condemned and then reprieved.

A lot of people believe that the gallows stood on the high point of the Stalling Down where the clump of trees are. Sometimes it is even suggested that prisoners were hanged from a branch of one of the trees. None of this is true; it is not even certain whether there were any trees there in the 18th Century. The famous clump seems to have been planted by the Reverand JM Traherne at some date after 1815 to commemorate the Battle of Waterloo.

The actual site of the gallows was on lower ground close to Hollybush farm, so that the crowds that came to see an execution gathered on the rising ground to the north and the south of the track which runs across to Hollybush.

Hopkins James, in his ‘Old Cowbridge’(p58) said that “felons were hanged, according to tradition, on the Aberthin (Hollybush) side on a spot where the fern never grows”. George Yate’s map of Glamorgan, published in 1799 marks the gallows roughly there, though no-one can say exactly where it was. It was a permanent structure of two upright posts and a crosspiece, something like modern soccer goal posts; the crosspiece would have been a bit higher of the ground, I imagine.

The prisoner, his arms and legs already tied and with a noose around his neck – was conveyed up from Cowbridge to the place of execution in a cart or tumbril. At some point in the proceedings the sheriff’s chaplain had the opportunity of trying to obtain the man’s confession and of reading prayers and part of the burial service over him. At the end of the slow, lumbering journey the cart would come to a halt under the gallows; the rope would be tied to the crosspiece and, at the command of the sheriff (who was master of ceremonies) horse and cart would move forward leaving the prisoner suspended. Since there would not be much of a drop death would occur from strangulation rather than breaking the neck. It would not therefore be instantaneous – far from it!

Cornelius Gordon belonged to one of the most prominent families in the Gower; a relative Richard Gordon of Burry Green had even been High Sheriff of Glamorgan in 1770.

Public executions were not abolished until 1868. When they moved back to Cardiff executions took place on the little heath between Cardiff and Roath, and after 1830 on a platform in front of the county gaol in St Mary Street Cardiff, where the famous Dic Penderyn was hanged in 1831 for his part in the Merthyr Rising[ii].

The Clump was originally planted in 1850 by Rev. John Montgomery Traherne(who lived in the village and was briefly a curate at St. Hilary church).

It was renovated and replanted in 1990 as the result of a working party convened to celebrate 900 years of history in St. Hilary village. Steve Williams (husband of Jill, who lives at Holly Cottage) drew up a schedule for the replanting and pruning of bushes in the walled area. Villagers and their friends and family did the digging and planting, which took place on Saturday 17 and 24 November 1990. Sir Cennydd Traherne*, a relative of Rev J M Traherne, was invited to plant  a commemorative tree and cut the ribbon at  the ceremony, held at The Clump, to celebrate the replanting, on Sunday 2December 1990. (*Sir Cennydd Traherne KG, TD, born in Coedarhydyglyn  14 December 1910, and Lord Lieutenant of Glamorgan from 1952 to 1974) 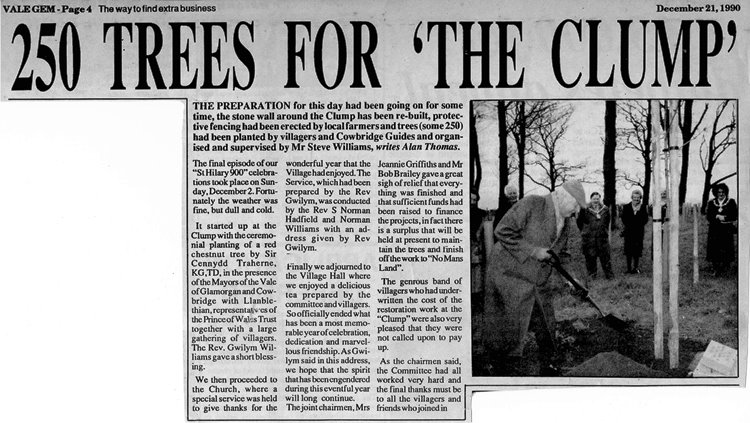 Clare Pullon remembers the memorial plaque being vandalised by a Welsh nationalist protest group. They came and daubed paint on the plaque, as they objected to it being written only in English. Clare remembers that it took ages to remove the paint.

Tree Circle (above Stalling Down, Cowbridge)

These trees, which make their sanctuary apart,
Have seen the last, slow ritual of the sheaves,
And now with mellow patience in the heart
Await the acry festivals of leaves.

They know not pain or disillusionment,
Nor dark deceits of men, but rooted stand
Deep in their own tranquillity, content
To mark the moods of this prophetic land.

They see gold moon on waters; are aware
Of wandering starts that fade and rise again;
They hear the bells of spring, and gently bear
The sharp impertinence of winter rain.

They know their faith renewed when, warm with grace,
The sun’s sure fingers limn the hills with light,
And stand in closer brotherhood face to face
When dusk leads down the legions of the night.

So, in this hallowed place, where hate and fear
Thrust not their frosty fingers, I am free
To share the healing chalice offered here.
And see, afar, my own epiphany.

In the late 1980s villagers got together for bonfire night. The families would make their way up to Stalling Down by torchlight to enjoy the bonfire and fireworks. Local farmers built the bonfire and initially families would take a box of fireworks with them. However, you had to have a keen eye to see small bought fireworks and it wasn’t long before a pyrotechnic expert was found to build an impressive display. Colin Mitten, (formally of Bluebell Wood) took on the job of buying industrial sized fireworks and sorting out the display.

Fireworks were funded from the proceeds of village events throughout the year and when necessary donations were collected in a bucket, to meet the costs. However, as the cost escalated discussion took place as to whether villagers should be charged for attending the bonfire celebrations. Eventually it was decided that this would not be appropriate. There were also health and safety concerns and rising insurance costs. Therefore, the Village Hall Committee decided that it would not be continued. According to Village Hall Committee meeting minutes the last village bonfire was held on 15 November 1994.

It is thought that initially Isobel and Peter Lowe took up a huge soup tureen and baked potatoes for all to enjoy. Later, however, food was served in the Village Hall and villagers would voluntarily produce baked potatoes, hot dogs, soup, gingerbread and hot drinks which was always well received after standing in the cold on the downs.

There was recollection that one year (mid 1990s) somebody set fire to the collected wood 2 days before bonfire night. But, the farmers, who always collected and delivered wood to the Downs to build the bonfire, stepped in and rebuilt another one so bonfire night took place but just a day late!

Beacons to celebrate the marriage of Prince William and Kate

The last torchlight parade and bonfire that villagers took part in was in 2011 when beacons were lit across the UK to celebrate the Royal Wedding of Prince William and Catherine Middleton.

The beacon bonfire was on the upper parts of the St Hilary Down on the Cowbridge side - so it could be seen long distance for the beacon trail.  There was a torchlight procession as well as the lighting of the beacon and the event followed on from a day of festivities in the Village centred around the pub and the village green.  The beacon was a combined effort by Cowbridge and other villages like Aberthin as well as St Hilary and was part of a national scheme to light the beacons across the UK and was not organised by St Hilary village per se.

From around 2019 onwards a group of villagers, the 3Cs, have been tidying up the Clump and restoring it to its former glory.

[ii] The Hangings on the Stalling Down. Cowbridge Record Society Newsletter no.6 October 2004 (a copy of which is held in the local history room at Old Hall).