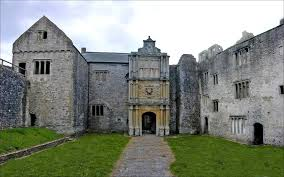 A partly fortified manor house dating from the 14th century. It was completely remodelled in the 16th century and the magnificent carved porch was added in 1600. A new manor house was built nearby in the 19th century.

The visitor's approach to Old Beaupre, down the gentle valley of the river Thaw, gives just the right impression of the rustic idyll, the beautiful retreat, that its Anglo-Norman name suggests. Old Beaupre was a medieval and then Tudor manor house, built around two courtyards. The medieval part, dating from about 1300, consisted of a group of buildings loosely arranged around the southernmost, or inner court. In the 16th century an extensive program of rebuilding was undertaken, started by Sir Rice Mansel, continued by William Bassett and finished by his son Richard. This phase added the northernmost buildings around the middle court, and included the building of Old Beaupre's most important feature, the outer gatehouse and the storeyed porch. These are remarkably well preserved, despite the ruinous state of most of the buildings around them. They demonstrate the Bassetts' wealth and pretensions to grandeur, as was doubtless their intention at the time. The heraldic panels and inscriptions on each leave no doubt as to who built them.

From the outside the manor appears tall and rather gaunt, with few windows; with the exception of the outer gatehouse, it was mainly inward-facing. The visitor enters over a stile in the walled outer court and encounters the three-storeyed outer gatehouse and embattled curtain wall, which were part of the great Tudor rebuilding. The main feature is the arched entrance with its pseudo-classical decorative surround. Over the columns can just be made out the capitals R B (Richard Bassett), C B (Catherine Bassett, his first wife), 1586, and R B. Above the doorway is a heraldic panel which includes the motto of the Bassett family, which reads 'Better death than dishonor'. The middle court within is completely enclosed by a high curtain wall with a wall-walk around the top which was rather curiously suspended between two parallel walls on the east side. Below this side is a raised terrace which was probably a garden feature. The tall, narrow building in the north-east corner is of unknown purpose.

The south range and tall gabled block to the north-east is the oldest part of the manor. This was originally the northern side of a court to the south, which is now a private garden. The original gatehouse can be made out to the left of the porch where there is a blocked arch with a Tudor window inserted into it. In the Tudor building, this was converted into two rooms. The ground floor is not open to the public, but the first floor can be reached up some steep stairs to the left of the present entrance, or through a Tudor door into the north-east block from the east wall-walk. Tiny stairs lead to a small privy and a now floorless upper level. The entrance porch leads straight into the 14th-century hall, now open to the sky. Like the rest of the range it was much altered, particularly with the insertion of bigger windows in the 16th century, but it retains its magnificent heraldic 14th-century fireplace, possibly moved to its present position from the west wall in the Tudor rebuilding. A modern wooden walkway leads across the east end at first-floor level where there may originally have been a gallery. The fine six-light window facing the inner court is 16th-century. The other 14th-century buildings ranged around the court are not open to the public. At the west end of the court, overlooking the valley, is a garden terrace, probably added in the 16th century.

Along the west side of the middle court is a large block which is the earliest part of the Tudor additions, built probably by Sir Rice Mansel in about 1540. It is a three-storey building, now roofless and floorless, which was evidently luxurious living accommodation judging from the large windows, fireplaces and in particular the stairs and privies. The stairs were innovative - their lower, stone treads survive in a great square stair well with a central pillar, which still stands to its full height. The privies were numerous and were all housed at the north end of the building, with a running water drain which still survives.

The last and architecturally most important feature at Old Beaupre is the great storeyed porch. The contrast between the porch's smooth yellow ashlar stonework and the surrounding rough local stone is stark but misleading. Originally, all the walls were rendered with the same fake ashlar. The porch is built to a very high standard, and its details, except for the lozenges at the base, are very well preserved. In typical Tudor fashion it combines a number of styles, with its Tudor archway, classical columns and strapwork decoration. The north face is divided into three stages, with pairs of columns, in the classically correct ascending order of Doric, Ionic and Corinthian, flanking the entrance. Above them are heraldic panels and a blocked window. The panel is another celebration of the Bassett family, and below is an inscription in three small panels which states that Richard Bassett built this porch in 1600 at an age of 65. The earliest known use of brick in Glamorgan is in the inner facing of the porch, the surface of which is grooved to simulate rustication. The chimney to the right of the porch, now lacking its top half, was probably built at the same time. Thereafter Old Beaupre was little altered. After the Civil War the family's fortunes declined, and by the time it was sold at the beginning of the 18th century only part was still habitable.