Walking / strolling destinations along the A48

Cowbridge Physic Garden: The hidden treasure of the Vale

Down Church Street and behind a high stone wall lies Cowbridge Physic Garden. The garden was originally part of the Old Hall Gardens, laid out by the Edmondes family in the 18th century. Badly neglected in the 20th century it was brought back to life by enthusiastic volunteers and today is a glorious array of medicinal plants and herbs, typical of physic gardens from centuries past. The site is relatively small, just ½ acre but is laid out in a formal pattern and contains a fascinating variety of species that would traditionally have been used for healing, cooking and dyeing fabrics.

The garden is free for all to enjoy. It has been described as a small oasis of calm and tranquillity, just a few steps away from the noise and pressures of modern day life. All paths are flat and well maintained, so pedestrian and wheelchair access is easy. It is open every day except Christmas Day, 10am-4pm in winter and 10am-6pm in summer.

Thomas Mawson was commissioned by John Cory to design a garden to complement Dyffryn House.  Dyffryn Gardens is symmetrical in the way it lines up with the windows of the house.  After John Cory's death in 1910, the job of further developing the gardens fell to Cory's third son Reginald who was a leading figure in the RHS and a keen horticulturalist.  During the 1900s he sponsored several plant hunting expeditions worldwide.

Dyffryn House and Gardens are now looked after by the National Trust. 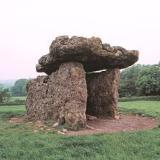 This beautiful chambered tomb stands in splendid isolation in the middle of a field.  Its massive capstone is 4m (14ft) long, 3m (10ft) wide, and 0.7m (2.5ft) thick.  The insides of the two portal stones have been smoothed and the back stone has a port-hole on its top.  This Neolithic burial chamber is oriented East-West, and a mound of earth or stones probably once covered it.  Still unexcavated, St Lythans is unusually high and therefore it may never have been completely covered.
Source: www.stonepages.com

St Lythans is maintained by CADW 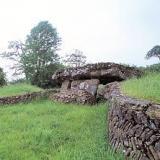 Tinkinswood is also known as Castell Carreg, Llech-y-Filiast, Maes-y-Filiast and Gwal-y-Filiast: names possibly connected to King Arthur's saga.  Built around 4000 BC in a small valley in the Vale of Glamorgan, this long wedge-shaped cairn contains a rectangular stone chamber.  The enormous capstone measures 7.4m x 4.5m (24ft x 15ft) and weighs about 40 tons; it is believed to be the largest in Britain and it would have required the efforts of some 200 people to lift it into position.  Inside the chamber were 920 pieces of human bone, nearly all broken, showing that at least 40 people of both sexes and all ages were buried here in Neolithic times.  The horned entrance faces north-east and in the mound itself, behind the capstone, lies an enigmatic stone-lined pit, whose purpose in unknown.  Corpses were probably left exposed in it before the skeletons were finally interred in the burial chamber.  The remains of other bones, soft red Neolithic ware, and Beaker style pottery were also found, showing that the tomb was probably used by a small community over a long time, maybe up to the early Bronze Age.
Source: www.stonepages.com

Tinkinswood is maintained by CADW

The castle is in the village of Llanblethian, Cowbridge, Wales. It is a scheduled monument and a Grade II listed building and is under the care of Cadw. The site was first occupied with a defensive structure in about 1102 and the gatehouse and further building work took place around 1312.
7 Castle Hill, Cowbridge CF71 7JT

St Quentin's is mantained by CADW

The first “natural” burial ground in the Vale was opened in June 2008 at Coedarhydyglyn, off the A48 at the top of the Tumble, St Nicholas.  The burial ground is in a traditional meadow and pastureland.  It is a spectacular location with elevated views across Cardiff to the Severn Estuary with glimpses of the Millennium Stadium and, on a clear day, the Severn Bridges.  To the north there are fine views of St Fagans, Castell Coch and the Garth Mountain; to the south the Bristol Channel.  The burials at the ground use biodegradable coffins and there are no headstones or surrounds to graves as these would detract from the natural landscape.  Website