After visiting Kerala (southern India) with great friends (Caroline and Tim) last year we decided that we should test out the knowledge that we had gained at a cookery school we visited whilst we were there. And, who better to test it out on but friends and villagers. As January is normally a dreary, long, cold and damp month we decided that this would be a good time to lighten up people’s lives. So, Saturday 19 January was the date that was set. A poster was designed inviting people to join in our culinary experience and after a slow start (probably because of the distraction of the Christmas celebrations) we soon had a full house!

The run up to the event was hectic. There was shopping and lots of cooking to do! Caroline and I put aside a day to visit City Road in Cardiff to find the ingredients that we would need. We spent a great afternoon perusing the shelves of the ethnic supermarkets often getting distracted when we saw lots of foods from other countries. Perhaps we could do a Greek evening in the future, or a Moroccan evening? Caroline and I easily get distracted!

It wasn’t long before we realised that we didn’t really know the quantity of ingredients we needed but help was on hand when we found a wonderful shop keeper who guided us through the process. He seemed rather amused when we thought we would need a whole box of chillies and pointed out that for the number we were catering for (45) we would only need a handful!

Kashmiri chilli powder was on my list. I searched and found a large bag which would probably keep an Indian restaurant going for most of the year and I only needed two and a half teaspoons?? It was velly, velly cheap though – only £2.49!

Having shopped till we dropped we arrived home. The car was loaded with a sack of onions, large quantities of vegetables and lots of spices. Now all we had to do was cook it.

For the whole of the week before the event we experimented with the recipes, frequently tasting them to make sure that they came up to the mark. My calculating up of recipes is shaky so it was an interesting process. Some of the tastings included Terence’s onion bhajis..

After a lot of experimenting and tasting, and curry every night that week, we decided that we were very happy with our recipe choices – but perhaps wouldn’t want to eat curry again for a while! Well, at least Caroline and Tim could get away with that but Terence and I were off to India two days after the great culinary extravaganza! 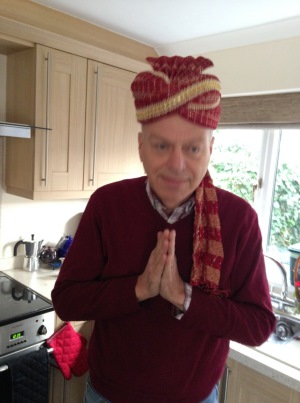 And, on the back of the menu we gave diners an insight into Kerala and the wealth of its produce – fruit, spices, tea etc. etc.

And, amongst the frenzy of preparing and cooking the food we even managed to find the time to find some traditional Indian costumes.

Apart from one although Terence did buy his T shirt in Kerala and its got an elephant on it. 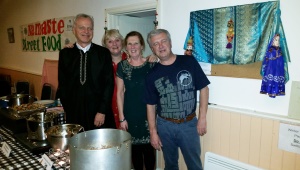 The evening arrived and diners were not only treated to our tasty morsels Terence created a slide show to test their knowledge of spices. It was good to see that some were like us and didn’t know what they looked liked when they were growing!

We were really pleased that the evening went with a swing. Everyone who joined us seemed to go home happy – and full I would guess. We encouraged people to take goody bags and I managed to off load a little of the excess Kashmiri chilli powder!

We have to admit we did cheat a little. We found an Indian lady in Cardiff and commissioned her to make the rice, samosas and pakoras. And, well worth it in my view – they were delicious. 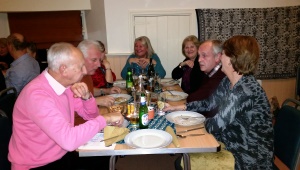