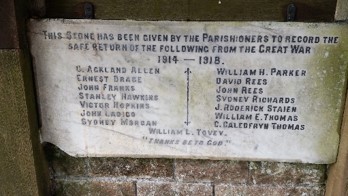 Records show that the Staien family lived at Coed Hills and New Beaupre around 1900-1950.

In a book entitled Cowbridge & District Remembered 1900-1950 there is information about Joe Staien. Below is an extract from the Cowbridge Record Society Newsletter (2002)

The Vale of Glamorgan brewery opposite the Duke was owned by Mr (Alderman) Lewis Jenkins who lived at Graig House, whose son Mr WLJenkins managed the brewery and making of ‘pop’. The Off Licence was managed by Joe Staein who lived in St Hilary (1).

Ralph Bird (Cowbridge) recalled that “Joe Staien from St Hilary had a James motorbike and a very popular type of coach built side car called the Canoelet which cost 12 guineas. It was possible to buy a wicker sidecare for as little as £3. 15.s 0d. Every time Joe went home for lunch he would run alongside the bike and as soon as he had gained a little momentum (going downhill) he would drop the exhaust lever, start the engine, get on the bike and before he had passed the Town Hall he would have transferred himself to the side car. I should have pointed out that at the time there were no clutches or gear boxes on motor bikes. It was direct drive by the belt from the engine pulley to the belt drum or the rear wheel. Joe would get up a good speed, blowing his bulb horn nearly all the time and would shoot past the crossroads where the Edmondes pub is situated and where the lights are now at a good 30-35 MPH so that he could climb Primrose Hill. He never had an accident.” (2)

J.R Staien is mentioned in a 1912 Cowbridge& District Motor Club programme. The event took place on Wednesday 11 September. Below is a photograph from the event. 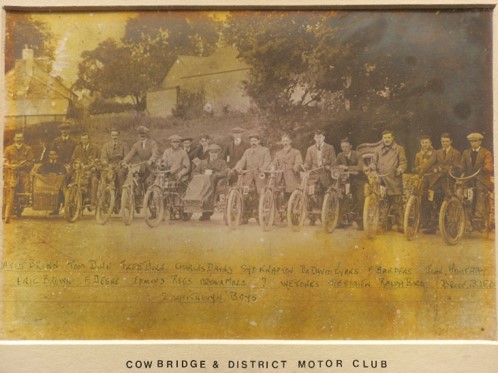 The account below is given by JR Staien for the Cowbridge Publican memories.

“In the Autumn of 1907 I was a clerk in a local Brewery, Wine & Spirit Stores and Mineral Water Works. There were about twelve fully employed and several casually employed. Father and son were in the business. They were very generous and the business was conducted to the penny. We worked in a large office, with one window facing the main street; it was a very pleasant outlook. It had a very large grate, and there was always plenty of coal. At the deck, which extended half-way across the office, on the right-hand side facing the window, was a counter with a flap-door let in, and facing that was a very wide shelf containing six polished nine-gallon casks, brass taps, with little white china buckets hung underneath to catch the drops, and containing Irish and Scotch whisky, rum, gin, French and British brandy.

We brewed beer about twice a week, and it was the town's boozing paradise, especially on a Sunday. It was the Vicars' and Curates' meeting place on a Tuesday. They would walk down the passageway, papers in their hands, and some with handbags, and step briskly up a step into a room at the back of the office. All quiet there; some would buy whisky, others gin, and always a stiff glass of spirit. I remember one Vicar coming in to the cool back room on a very hot day, and saying, "Bring me a pint as big as a bucket," and standing up, with his frothy pint, say "If it wasn't for my cloth I would stand on the office door and drink it."

Another vicar, a bachelor, would walk into the office once every week, bring a dozen eggs and take two small bottles of stout, at 3d. each, and I would pay him from the till 2d. difference. Another vicar would give me a dozen of sitting eggs, from his prize-winning fowls.

Chapel people would come for a bottle of whisky, gin, or brandy, only in the dark, and say to me, "It is only Doctor's orders. It's for my husband, you know, he's got a bad heart."

Brandy is a good stimulant; I have known a woman come in quickly, her lips blue, and walking one-sided and not able to utter a word. I jumped the counter and held a glass of brandy to her mouth. She revived at once and felt better.

All the men working in the brewery who drank excessively, died before they were sixty.

A great character was the milkman, and a familiar spectacle with milk cans hanging from his yoke. He bought a bottle of rum at 3/6 every morning except Sundays for ten years, and he would drink four of five rums and milk on his journey.

Sometimes the wives would come to the cellar to receive their wages from their husbands, otherwise they would not see much of it. I remember one foggy November evening, one of the worker's wives stood inside the doorway, and at the back of her was a large round tub of barm. Her husband came in after receiving wages, "Harry, hand over," she said. He gave her a gentle push, in a friendly manner; she stepped backwards and sat in the tub of barm. I can now see her two black stockinged legs standing straight out, and the barm bubbling over the sides. She managed to get out, shouting vengeance to her husband, as she ran up the passageway, with her black dress dragging at her heels, and the white barm covering the brown bricks.

This is a notice that appeared in the Glamorgan Gazette on 23 July 1915:
Notice given by Joseph Staien, Coedhills Stud Farm and the Bush Inn, St Hilary – to the public & all whom it may concern : whereas reports have been circulated and statements made to the effect that I am a German, which…are utterly untrue as I am British born of British parents. The place of my birth, and that of my Father & Mother was Stratford-on-Avon, while my paternal Grandfather & Great-grandfather were born in Packington, Warwickshire, and my maternal Grandparents were also born in that county. If, after the publication of this notice, any person or persons circulate reports or make statements to the effect that I am of German or other Alien nationality, I will cause proceedings to be instituted…. (Witnessed by Wm. T. Gwyn, solicitor, Cowbridge) 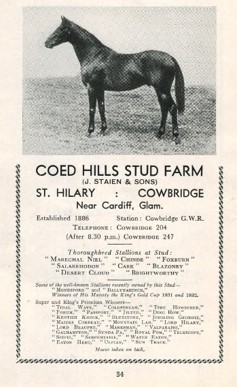 Please contact This email address is being protected from spambots. You need JavaScript enabled to view it. if you have any information about the Staien family to share.