Foraging markets and plant sales - supported the development of the Forum 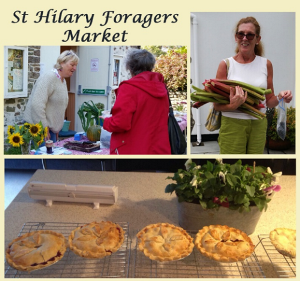 The market was established by Monica and Caroline in 2015. The first plant sale took place in 2016

Foraging was introduced to make use of the surplus fruit that was going to waste in the village e.g. apples and blackberries. Villagers were asked to contact Monica and Caroline if they had any surplus fruits to donate and offers that year were mainly of apples. The bounty that was collected was turned into chutneys, jams and baked items and an event called the St Hilary Foragers Produce Market emerged. Liz & Pete Loch and the Riverside Market Garden, Coed Hills took a stall at the event to sell some of their own produce.
The event was held outside the village hall on Wednesday 30 September - no teas and coffees were sold. Surprisingly £315 was raised.
In 2016 the event was held on Sunday 9 October at lunchtime, after the church service. It was held inside the hall and tea, coffee and cake was offered to make it a more social event. The amount of fruits on offer increased and some members of the community provided assistance by making pies and crumbles with some of the foraged fruits. Caroline contacted Coed Hills who gave their support by offering fruit. In an effort to further develop the event a trader from the farmers market was invited to sell pesto, which seemed to be popular. Liz & Pete Loch kindly provided their apple press and people were invited to press their own juice. Monica tried out baked savoury pies to complement what was already on offer. This was successful as was the soup that both Terence and Caroline provided.

By 2017 the foraging had grown substantially with more variety of fruits on offer e.g. rhubarb, plums and pears. More villagers were generously offering surplus fruits and vegetables and more helped with the baking. Savoury bakes and soup continued. Liz and Pete Loch once again provided their apple press and Vale Cider took a stall. Wider publicity also saw a greater number of people attending from outside the village, Including Vale Tourism. The event was once again held on a Sunday lunchtime with tea, coffee and cake on offer. The success continued and £600 profit was donated to the Village Forum

The first time the plant sale was held was 15 May 2016. It was held in the village hall and included a coffee morning where villagers could enjoy tea, coffee and cake. Villagers were asked to donate any surplus plants to sell and the Herb Farm took a table. The event raised £452 which helped to fund the inaugural St Hilary Bake Off.

The event was held again in May 2017 as a coffee morning and plant sale in the garden of Ffynnon Wen. Despite the atrocious weather it raised £356 which was donated to the Forum.

Monica and Caroline are pleased to have been able to support the development of the St Hilary Forum and the Bake Off by donating funds raised at these events.