In 2018 the village adopted the telephone box 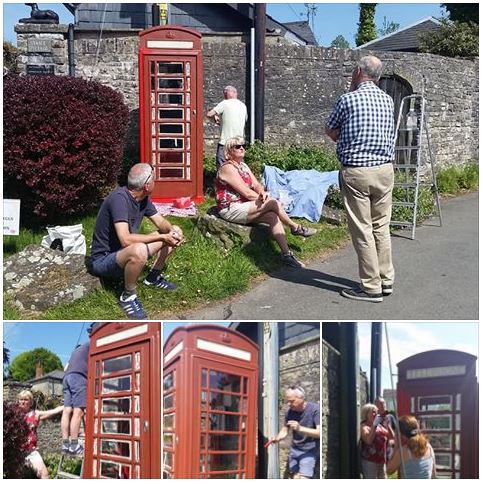 In December 2019 villagers braved the rain to watch the lights being switched on in the St Hilary telephone box. For the second year running Santa and his Elves dropped by to decorate the box for Christmas and the popular Santa’s Pantry and Elf Exchange were the main features. Santa’s Pantry was for the children and the Elf Exchange was for the little people. Each shelf contained a gift that visitors were welcome to take - but if they did they had to leave another gift in its place.

In September 2019 it was used to celebrate the Rugby World Cup - and included an appearance from the future Welsh coach, Wayne Pivac

The Dyeing to Paint group that meets in St Hilary Village Hall took time out the previous day to view the display, in the village telephone box, which some of them had had a hand in creating. The felt poppies cascading down the box had been made by members for the group’s WW1 quilt project. The quilts were displayed in Cowbridge shops in 2015 and 2016 and the Senedd in 2017.

There were lots of positive comments from both villagers and visitors: