Sian’s home, Gweled-y-Glyn, has always been in the family. The picture shows the house before the extension was built on the side.

Her house, and the one next door were built around 1912 by Sir Gerald Bruce who resided in the Grange . Sian’s grandfather initially worked as the Groom to Sir Gerald and then became his chauffeur.
Sian’s other grandfather (Welsby) was also a chauffeur. He worked for the Coryton family. The chauffeurs used to meet regularly in the kitchens of the grand houses.

Sir Bruce left the house to Sian’s Grandfather when he died.

Lady Bruce, from the Grange, opened the Village Hall in 1930

The house was originally called Swn-y-Don which means sounds of the waves, but was later changed to Gweled-y-Glyn which means View of the Vale. Though it is not certain it is thought that the house name was changed following the completion of an extension in 1961. This extension now gives a beautiful view across the Vale.

When the house was built there was:

Sian bought the field at the side of the house when it came up for sale in 1997. It is currently rented out to Bob Lucas from Eastdown Farm.

Sian’s parents were married in St Hilary Church on 2 September 1939.  War was declared on 3 September. 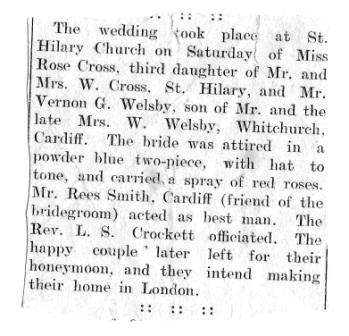 Rose was the only one that married. Kathleen and Mary were both nurses. Mary was an industrial nurse and Kathleen was in the Royal Army Corp. 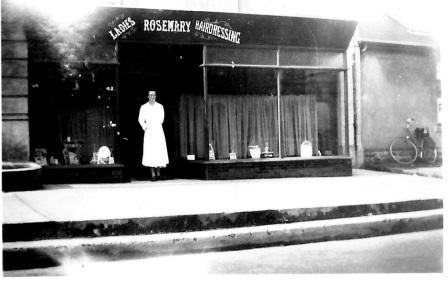 Nancy lived in Gweled-y-Glyn until her death in 1996. The house was bequeathed to Sian in her will.

A drawing of St Hilary Church by Nancy Cross 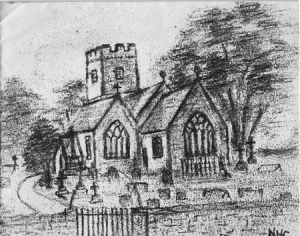 This is a photo of Nancy with Terry Dennis's mother - Margaret Dennis - taken in 1988 on the christening of Claire Dennis.

In her later years Nancy drove a mini metro car but previous to that she rode a motor bike. “Quite a big one for such a little lady”.

This photo shows Sian’s brother sitting on the bike. 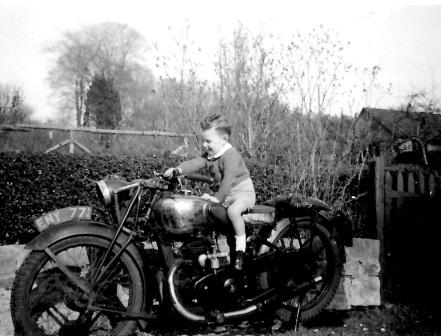 Sian moved into the house in December 2000 from Hong Kong where she had lived for 32 years.

She met her husband Paul out there in 1968. Her husband was in the police force and Sian was a teacher. There are two children Nicholas (39) who lives in Hong Kong, and Samantha (36) who is resident in Australia.

Sian grew up in North Harrow. Her father was an engineer with the post office and then went on to lecture at Birmingham University. He was involved in the laying of the first transatlantic telecommunications cable.

Sian trained as a teacher at the County of Stafford training college. She went on to teach in Essex for three years before applying to the army and moving to Hong Kong.

Sian’s grandmother was a founder member of the St Hilary WI, which was established around 1936.

And, Sian’s great grandfather ran the Masons Arms (which became the Marketplace) in Cowbridge

Sian and her brother were evacuated by their mother from London to St Hilary during the war.

When reflecting on childhood memories Sian remembers that West House opposite was the farm house, Ffynnon Wen was a milking shed and Darren Las was the milking yard.

The original stone built part of Abbotswood was where the post office and village shop was located. It was run by Miss Rees.

Manor Piece was built in the 1960s. Elizabeth Giles who lived there before the current owners, was brought up at the Manor House.

Vivian Davies, the son of farmer Tom Davies, was living in Cartref when it was bought by the current residents. Vivian’s aunt, Sarah Davies (Tom's sister), originally lived in Cartref and Vivian moved in when she died.

The building on the A48 which was, until recently a Loch Fyne restaurant  was, in a past life, the Hollybush Tea Rooms. It was Mulligans restaurant before becoming the Loch Fyne. It opened under new management in 2013 as the Bryn Owain pub.

The photo below is of the original tree that grew opposite the St Hilary Church Litch Gate. It was removed because the roots threatened the foundations of Old Hall Cottage. It was replaced with the current weeping willow: 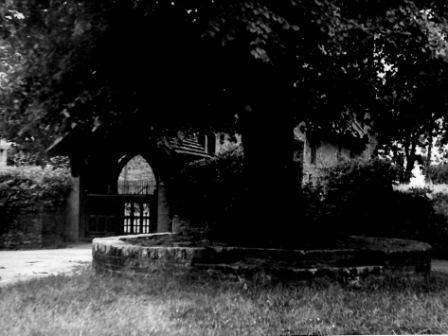