Ochiltree is a house that is situated in the centre of the village at the start of the lane that leads up to St Hilary Down.

Previous owners, Bill and Angela Strong (here's a link to a talk that Bill gave to the village about his military career), informed us that the property was formerly called Wendy Cottage and have this letter about the history of Wendy Cottage - it is dated 26 September but there is no year:

Your prospective purchasers will no doubt like to know the history of Wendy Cottage as I know it.
My parents bought the derelict little place for their retirement. My father wanted to do the renovation himself.
He was able to get stones from demolished old buildings and a beautiful over mantle which he incorporated into the inglenook.
The cottage was half its present size, but he was able to enlarge the lounge into a window at the front with a balcony over.
They thought Wendy Cottage was home for them so they brought the name of their house in Ogmore by Sea with them when they moved. That house was indeed built for a family who came from Ochiltree in Scotland.
The very shallow roof had been thatched until 1927 when the then owners had a grant to replace it.  In my parents time the house was about half the frontage. It was most interesting to see your picture of the dear old place and I would wish any new owner to enjoy it as my family did.

I hope this isn’t too boring

Previous to Angela and Bill living at the property it was owned by Julian and Esther Hitchcock.

Bill and Angela moved to Cowbridge in the summer of 2019.

The new owners, Jude and Andrew Bateson, shared this postcard of Wendy Cottage which is dated 1922. 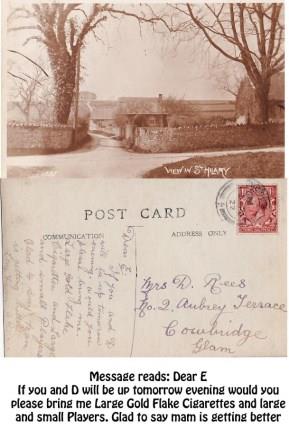 The large beech tree outside Ochiltree Cottage came down on 7 & 8 June 2016. It kept the villagers very entertained! 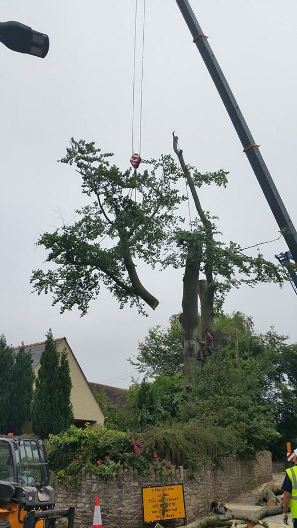 There is a collection of photographs on the St Hilary Chit Chat Facebook group page. They include 4 amazing aerial shots taken by Ewart Schofield from the top of the carne.