As a young woman Maud Jenkins (nee Young) was house parlour maid, first at Lanelay and then at St Hilary. She worked for the Bruce family who moved from Lanelay, near Llantrisant in 1924 when they bought the Vicarage (renamed the Grange) from the Church in Wales (click here for the story of the Bruce Family).

Maud was one of six house servants employed by the Bruce family. Her fellow servants were housemaid, ‘between maid’ cook, kitchenmaid and laundry maid, plus a housekeeper and children’s governess. Maud and the others ate in the servants hall and slept in the attic rooms, working long hours especially when the Bruce’s entertained or returned home late at night. The staff were given two weeks holiday in the summer and for Maud this was an opportunity to visit her own family at Brynna.

Outdoor staff at the Grange included a groom and a gardener and Maud vividly recalls the well tended gardens, particularly the walled kitchen garden where a rich variety of fruit (including luscious strawberries) and vegetables were produced both out of doors and in the heated greenhouses (1).

Sian Deal , who lives at Gweled-y-Glyn shared some relevant history. Her house, and the one next door were built in the 1920s by Sir Gerald Bruce who resided in the Grange. Sian’s grandfather initially worked as the Groom to Sir Gerald and then became his chauffeur Sir Gerald’s gardener lived in the adjoining house, Cartref.  Sir Gerald Bruce left the house to Sian’s Grandfather when he died.

The following was provided by Sue McDonagh on 12 April 2020:
“My mother in law, Margaret McDonagh lived in the cottage linked to Maud Jenkins. They were linked so that each of their front doors opened on the opposite side of the house. Margaret's garden was a bit of a field, in terms of size, compared to Maud and Ernie’s.
I can remember the inside fairly well. There was a tiny kitchen that overlooked Maud’s garden, and a curtained entrance to the snug living room, which overlooked her own garden. Downstairs loo with a bath. Two bedrooms I think?
Her friend from Telford visited annually. We all called her Aunty Rosie. She was a lovely lady, whose big frame shook with laughter regularly. It was a matter of some astonishment to us all that she managed to use a chamber pot during the night without falling off it”. 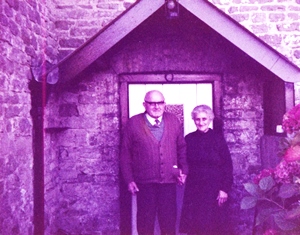 The two cottages mentioned above were bought at auction by Iuean and Sian Morris around 2005 and they moved in 2006 after renovating it. It was at this time that the two cottages wer turned into one – Manor Cottage. In 2020 the residents are Gareth and Ewa Thomas. 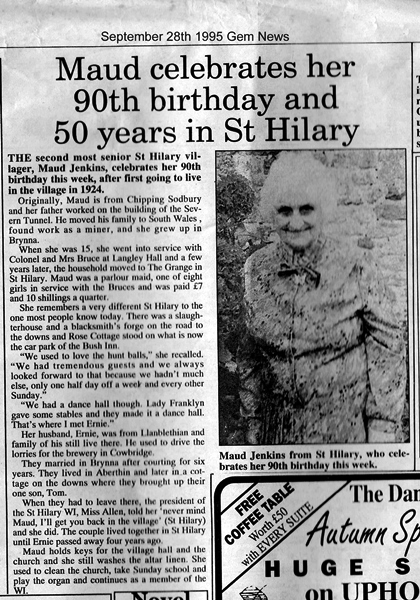 Maud and Bill Clay (probably at her 90th birthday celebration) 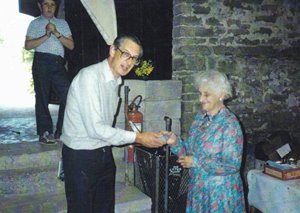 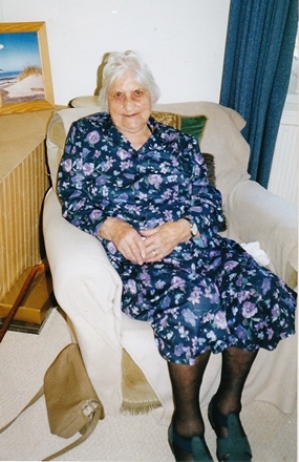