John Charles Clay was born on 18 March 1898 in Bonvilston, and died  on 11 August 1973 in St Hilary aged 75 years
He played for England, Glamorgan and Wales 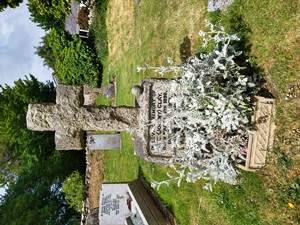 Johnnie Clay was the father of Glynne Clay and Bill Clay, who both lived in the village - click here to read the story of Bill and Gill Clay of Coed Hills.

Johnnie Clay was one of the most dedicated cricketers ever to represent Glamorgan. He first appeared for the county when they acquired first-class status in 1921 and continued with them till 1949; was captain in six seasons and for some time honorary secretary; and at the time of his death was President of the County Club, a position he had held since 1961.
http://www.espncricinfo.com/england/content/player/10745.html

Without the efforts of Johnnie Clay, Glamorgan CCC could easily have folded as a result of financial problems during the 1930`s. Between 1933 and 1938, he served as the club`s Treasurer and together with his close friend Maurice Turnbull, he spent winter after winter raising money for the club through special functions. The Cardiff-based businessman also used his contacts in the commercial world to good effect, and he steered the club through much adversity and ensured that the county remained afloat.

On the field of play, Clay led the bowling attack by example and in 1937 he took 176 wickets - a record which still stands as the most number of wickets taken in a season for the Welsh county. His efforts also resulted in a call-up into the England side for the Fifth Test against South Africa in 1935, but the Glamorgan stalwart turned down further opportunities at the highest level, preferring instead to play for his beloved Glamorgan.

Educated at Winchester, Clay hailed from a well-known sporting family in the Chepstow area. In his youth he was a tearaway fast bowler, playing initially in Minor County cricket for Monmouthshire, before making his Glamorgan debut in 1921. However, he was affected by a series of injuries, and in 1924 he experimented with both leg-breaks and off-spin. He also took over the Glamorgan captaincy, and through his enthusiastic efforts the club moved up from the bottom of the Championship table to 13th place. 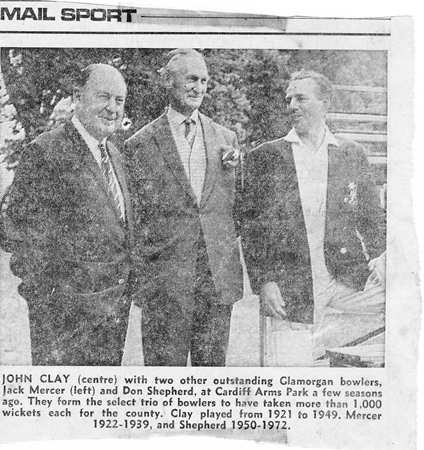 Clay was also an aggressive lower-order batsman, and he played many cavalier innings. In 1927 he hit an unbeaten century against the New Zealand tourists, whilst in 1929 he recorded his maiden Championship hundred against Worcestershire at Swansea. He raced to three figures in just 95 minutes, but what was even more remarkable, was that Clay was the number 10 batsman, and his partnership of 203 with Joe Hills for the ninth wicket stood is still the club record.

However, Clay`s forte was off-spin bowling, and the Glamorgan amateur proved to be one of the finest slow bowlers in county cricket either side of the Second World War. On three occasions he took over a hundred wickets, and in 1937 he produced the best ever match figures for Glamorgan of 17-212, after taking 9-66 and 8-146 against Worcestershire at Swansea. He was still an effective bowler in 1946 when Glamorgan regrouped after the War, and following the death of Turnbull, Clay agreed to lead the county as the Championship restarted, keen that his good friends efforts before the War were not wasted.

During 1946 and 1947 Clay assembled a new squad of players and he helped to groom Wilf Wooller as the county`s future leader. He handed over the captaincy to the former Welsh rugby international in 1947, and slipped into semi-retirement. However, with the prospect of the County title looming on the horizon, Wooller invited Clay to make a return to the county side for the decisive game against Surrey at the Arms Park. The veteran off-spinner responded with match figures of 10-65, and remained in the side at Bournemouth as the Welshmen became County Champions for the first-ever time. Indeed, it was fitting that Clay should take the final wicket, trapping the Hampshire number eleven leg before, and there were tears of delight running down his cheeks as he returned to the Dean Park pavilion to join in the celebrations.

Clay was highly regarded by the M.C.C., and served as a Test selector in 1947 and 1948, before playing his final county match aged 51, appropriately enough on Monmouthshire soil, against Yorkshire at Newport. He continued to be involved with the county side, serving as a Trustee and from 1960 he was the club`s President. Clay had many other sporting interests, including hunting and horse-racing. As a youngster he had ridden in point-to-points, and acted as Secretary of the Glamorgan Hunt. In later life, he was a Steward and a Director of Chepstow Racecourse, which had been laid out close to his family`s home during the 1920`s, and a long distance steeplechase is annually run at Chepstow in Clay`s memory. 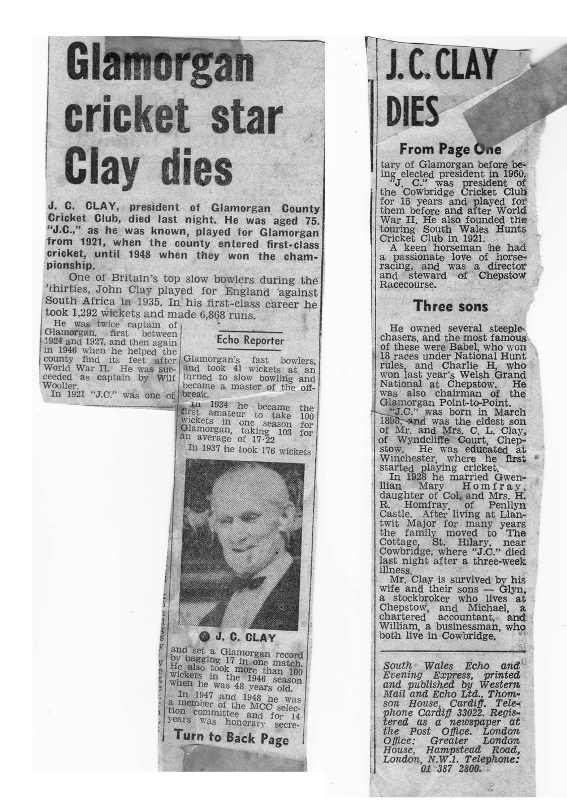 Glamorgan Gem
Johnny Clay – the man who made the difference
Tuesday, 31 December 2019

At the end of a year when Tiger Woods amazed everyone by coming back to win a major tournament at the age of 43, after it seemed his career was over, the president of Cowbridge Cricket Club, Jeff Bird, looks back at a local man who stepped back on the stage at 50 years old to help Glamorgan win the biggest prize!

Every so often sport throws up an unexpected performance that casts the memory back to the days when the performer was at his/her peak. Just think of Lester Piggott, Tiger Woods and Sprinter Sacre.
One comeback to rank alongside any was the recall to the Glamorgan colours of 50-year-old Johnny Clay who then proceeded to play a spectacular role in the Welsh county winning two crucial matches and securing the 1948 County Championship.

It was very much a case of Cowbridge winning the Championship for Glamorgan and Wales. Johnny Clay was born in Bonvilston at the end of the 19th century. He went to school at Winchester and by 1923 was representing Glamorgan.

When he was free of first class commitments he played for Cowbridge and in 1925 brought his friends Maurice Turnbull and Cyril Walters to play.  All three would go onto play test cricket. Johnny is recorded as having taken nine wickets in a match twice, against Barry and Pontypridd,.

Johnny’s career consisted of 373 first class matches and one test match against South Africa in 1935. His career yielded a total of 1,317 wickets at an average of 19.76. These figures tell us that Clay was a very good bowler.  Johnny was called up again against Australia in 1938 but considered himself unlikely to last a full five days so it was to be just the one test match.

Perhaps we can see here the beginnings of an all too common theme of Glamorgan cricketers gaining fewer caps than their talent suggested they should have (Parkhouse, Lewis, Maynard, Morris, James, Watkin) or none at all (Don Shepherd) and in one case even had his cap taken away (Alan Jones).

Amazingly, Johnny as an amateur cricketer held the role of treasurer of Glamorgan between 1933 and 1938 with his friend Turnbull as secretary. One cannot imagine the modern day players being allowed to hold such positions but then Glamorgan were very short of money. The glamorous duo proved themselves adept at fundraising but unfortunately the four matches played at Cowbridge in the 1930s failed financially..
No doubt Johnny would have added to his records had the war not interrupted it but when peace allowed the restart of cricket in 1947, he skippered the side before handing over to Wilf Wooller.

In the run in of the last three matches in 1948 it seemed that two wins would secure the title for Glamorgan. ‘Woollers’ had the task of making the decision as to who would replace the injured Phil Clift in the side to contest these last matches.  To Wooller it was never a decision that troubled him. If Johnny could be persuaded, he played.  Two victories followed and Wooller was entirely vindicated and by some measure. Bowling like a man half his age and at the very top of his game, Johnny took 19 for 125 over the four innings, both Surrey and Hampshire being obliged to follow on.

Use whichever adjective you feel appropriate to describe the performance, but it must rank as one of the decisive contributions ever made in sport. Put into context, Johnny Clay’s destruction of two county XIs in both innings was all happening in arguably the premier non-test match first class competition in the world.

The pressure was on, Glamorgan were challenging seriously for the first time and remember Johnny was 50 years old.

He did not play for Glamorgan again. He contented himself mainly playing for Cowbridge and The South Wales Hunts. He became president of Cowbridge CC and would bring a team of Glamorgan’s young professionals to play as his President’s XI to the club each year.

Retaining his influence at Glamorgan, he also served as the county club’s president. Often of a Saturday, Johnny would watch the game being played that day at Cowbridge and leave a substantial note of the realm for the players to have a drink.

Such generosity left a lasting image of a ‘lovely man’ with David ‘Scoop’ Lewis. Another image is, of course, his portrait by Douglas Davies which hangs in the Pavilion.
If you visit Johnny Clay’s resting place in St Hilary, a village close to Cowbridge, look for the marble cricket ball resting on the gravestone.. There could not be a more appropriate symbol of a cricketing life.