On 30 March 2021 we heard from Jo Robinson, a relative of the Griffiths family….

We sent the following newspaper cutting to Jo: 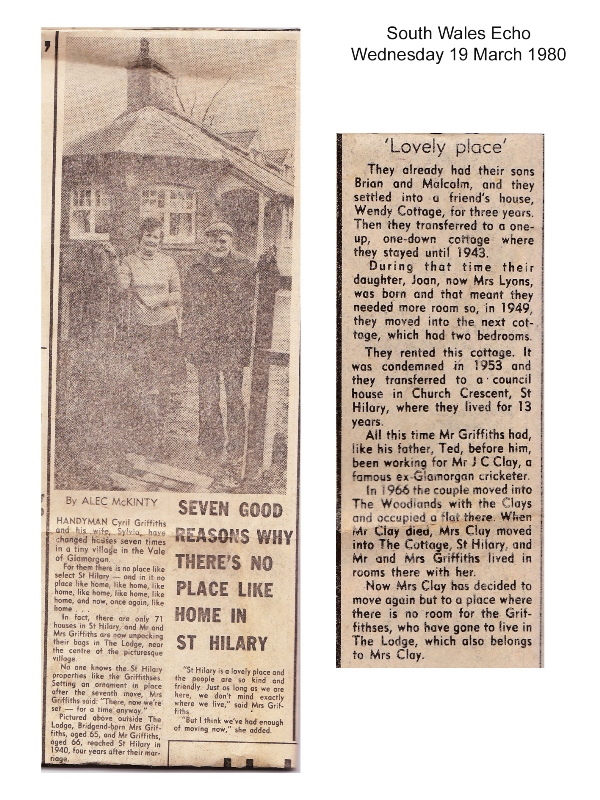 That’s my great uncle Cyril!!
The cottage my grandfather lived in is on the left as you drive into St Hilary. This may not be Woodland Cottage however my great grandfather Ted (Edward) is listed on the 1939 register as living at ‘Woodland Cottage’ just below the entry for John C Clay and his wife at The Cottage.
I have letters from Mrs Clay to my grandfather on headed writing paper when he was serving in the war and I also have some photographs although I’m not sure who they are.
Around 13 years ago we met Gill Clay at Coed Hills (we turned up unannounced after making enquiries about the Clays at the Church in Cowbridge).
She was so incredibly welcoming and invited us in, made a cup of tea despite the fact that we had interrupted her planned swim. I had told her of the letters and promised to return to show them to her however my mother became ill and then passed and life has just trundled on since then. Lockdown has reignited my interest to research the family.
My Nana met Doug when she was in the land army and they used to go courting at the Bear hotel. She said my grampi (Doug) used to be a driver for the Clays and used to take them to Cardiff for dinners. They allowed him to take my Nana with him so that was also part of their courting too. She must have thought he was a good catch having access to a car at that time!
I’d be very grateful for any information. Researching records is great but there’s never really any detail or depth so you only really get dates and factual info etc. 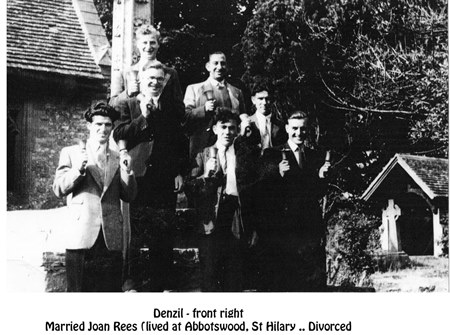 This is what villagers who remember the family had to say:

Joan Davies: I remember The Woodlands was the name of The Stables, because the name changed when Mrs. Clay sold that part of the property, and The Lodge has always been called that. Howard Jones was brought up at The Lodge.  Mrs Griffiths was killed crossing theA48. She was with her daughter in law Sylvia. They were going to Cardiff shopping and she ran ahead because the bus was coming and was hit by a vehicle coming down the hill from the Cardiff direction. Sylvia and Cyril Griffiths moved to The Woodlands (now Stable Cottage) from the council houses, then when the property was sold they moved into the flat attached to The Cottage, then on to The Lodge.  Cyril’s wife (Sylvia) was Edi Vaughan’s sister. They lived on the Crescent. Cyril Griffiths was the uncle of Caroline Arnold.

A neighbour identified Denzil in the bellringers photo. According to local sources Denzil married Joan Rees, who lived at Abbotswood. There was a John Rees and Annie Rees. Annie ran the post office from Abbotswood:

Gill Clay: Stable Cottage had been called Woodlands. Sylvia was very proud of having lived in so many houses in the village. I had thought it was 7! But I don't remember which. I know she lived in Little Hall when it was divided into 3 two up/two down cottages, when her children were little and Cyril was away in the War (WW2). His regiment was first into Belsen and saw such horrifying sights, but never spoke of it afterwards. It must have been terrible.