Bill Clay has lived in the village since 1938 and Gill moved to the village when she married Bill in 1968.

Bill came to the village in 1938 when he was 5 years old. His parents Mary and Johnnie Clay (an England cricketer - click on this link to read more about him and on this link to see his cricket record) moved the family from Boverton. Bill moved with his two older brothers: Glynne (1931 - 2014) and Michael (born 1928/9).   It was thought that the fields surrounding Boverton House were going to be requisitioned by the RAF during WW2, therefore Bill’s family moved to The Cottage in St. Hilary (see below).  The family didn’t move in until 1939 because it was in a state of disrepair. It had been empty for a while, following the departure of the Franklen family (previously from Clementsone).

One of Bill’s first, but dim, memories of visiting The Cottage, was looking at some backstairs where he saw some village youths hanging around. It appeared that this area of the house had become the preferred location for the village kids who would go there to smoke and hangout.

Bill had a happy childhood at the cottage and remembers that during WWII, the family hosted London evacuees. Firstly two girls were billeted with Mrs Mary Clay. Bill remembers that his mother found the girls very difficult to cope with. Somewhile later approximately fourteen ‘little people’ arrived at The Cottage. They were accompanied by two carers, a mother and daughter, who looked after them for well over a year in a wing of the house. Bill was approximately eight years old and remembers seeing the children but as they were a lot younger than him (perhaps around four years old) he didn’t spend much time with them. The carer eventually said she was packing it in. Caring for so many children probably got too much for her and so the whole group returned to London. Today The Cottage is quite a bit smaller than it was originally. After the war Bill’s father had the wing of the house demolished where the evacuees had been staying. It was done by Bob Thomas from Cowbridge.

During the war Bill’s mother drove a big van around the various RAF and armed forces camps in the vicinity. She sold cigarettes, coffee, chocolate and other items. Bill remembers helping to stack and store the supplies in the stables of The Cottage. His mother would load the van each morning before setting off. The men paid for the items but Bill is not sure if his mother kept any accounts, as she was ‘not very good with money’. The van was the equivalent of a mobile hotdog stand today!

Penllyn Castle was requisitioned by the RAF. Bill’s mother Mary was born in the castle, which was the home of the Homfray family for many generations and then bought by the Cory family in 1961.

Cardiff and Swansea were bombed quite badly during WW2 and Bill remembers possibly two bombs landing in the vicinity of the village e.g. on the downs, on the way up to ‘The Clump’. One such bomb is recorded on 25 April 1943.

Bill was in the loo at the time the bomb landed! A siren had sounded but Bill did not have time to get down into the shelter inside the house. The bomb blast was sufficiently strong to split the toilet door and gave him quite a shock.

The next day Bill explored the bomb site. He recalls that a lady, Mrs. Frederick (who lived near the Bush Inn, found a piece of the bomb. The piece of shrapnel had a swastika on it but Bill doesn’t know what happened to it. As a young boy Bill was aware of lots of planes flying over the area and found it quite exciting watching them. Bill believes two planes, (or possibly pilots who had ejected), came down over St. Hilary. One in the region of Old Beaupre and one in Coed Hills woods.

Bill is pretty sure there was a prisoner of war camp at Llanthrithyd. It housed high ranking personnel such as quite old Generals.  It was not a high security prisoner of war camp as Bill thinks the men probably didn’t try to escape as it would be against their honour.  Bill remembers prisoners of war from Llanthrithyd Park coming to tend the gardens at The Cottage.  They may have walked or bicycled from Llanthrithyd to St. Hilary.

(The PoW Camp was situated inside the boundary wall of Llantrithyd Park, near Pant Ffynnonau by Hill’s Quarry. It housed German and Italian PoWs.)

Olwen Williams worked for Bill’s father. She was involved in milking the cows and looking after the pigs. She also did some domestic work in The Cottage. On her retirement Olwen moved to Hollytree Cottage on Llantrithyd Road.

The Cottage was sold to Mr Phillips who was a vet. He gained planning permission for a house to be built on a portion of the back lawn at the Cottage (that had once been tennis courts). He sold this piece of land to the Johnsons who built Tumbler’s Chase. After he was widowed, he moved temporarily to London but then moved back to the village and lived in Abbotswood.

John and Fiona Curtis moved into The Cottage after Mr Phillips. Once again it needed renovation before it could be occupied.

In 1968 Bill and Gill married and moved into Coed Hills in January 1969. (Click on the link for the story of The Staines - former residents of Coed hills) Gill believes that parts of Coed Hills are very old, possibly dating from the Jacobean period (1600s). The house has been extended on several occasions. Coed Hills had been let to the RAF. Bill recalls ‘you could always get them out if you wanted to and they were good tenants’.  So the house was vacated quite quickly, for the newly weds.  Between getting married and moving into their new home, Bill and Gill lived in The Cottage. Gill remembers that Bill’s mother helped to make curtains etc. for the newly weds. 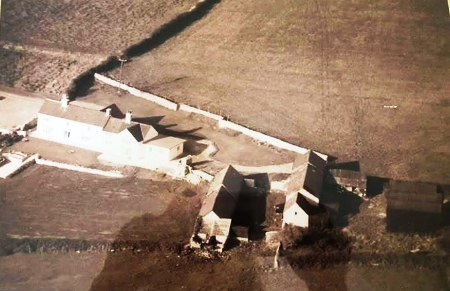 An aerial view of Coed Hills from around that time

In 1973 Bill’s father died (born 1898) and a couple of years later his mother moved to Pinklands (which she had built on the pigsty /cowsheds yard).

The Manor was owned by the Ackland-Allen family before the Williams’ family (Steve, Wyndam, Elizabeth, Veronica-Rose and Charles Williams). The Williams family moved to the Manor from Verlands house in Cowbridge, in the 1920s.

When Bill bought Coed Hills it had 99.9 acres of farmland. This acreage was a little too small to farm and as Bill was working outside the village Tudor Davies, from the Garn, farmed the land. Andrew and Jonathan Davies still farm the land today. Bill also bought a small patch of land from the church, thus making a neat total of 100 acres. Later Bill and Gill bought 75 acres of woodland from the Forestry Commission and learnt that the woodland habitat is a very important aquifer – like a sponge. This makes it a unique environment but quite difficult to maintain. The family has hosted several exhibitions in the woodlands; managed the trees; built paths etc. to allow the woods to be enjoyed by the local community, especially Coed Hills Rural Artspace.

The Lodge, St. Hilary was owned by Sir Gerald Bruce (an old Aberdare family) who also owned The Grange. The Lodge was then bought by the Clay family.

Gill Clay remembers being told about the terrible winter of 1962-63, when the Staine’s  family were living in Coed Hills. There was so much snow the house and surrounding fields were cut off for six weeks. The family owned horses and it became necessary to have food for the horses and sheep dropped by helicopter. Water, for the animals, was obtained from a well. Today the well acts as a storage tank for Coed Hills and is used to fill the swimming pool, etc. The scouts came out and cleared out the well so that it still functions today as a rainwater tank. 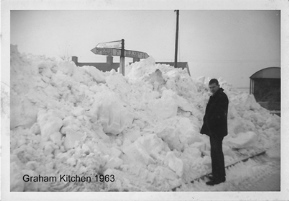 Since 1962 Gill and Bill Clay have experienced being cut off at Coed Hills several times during harsh winters Llantrithyd Road has been blocked by snow. Gill recalled one New Year’s Eve, in the early 1970s, when Sue Hawkins was babysitting. By midnight the snow drifts were so deep that when Bill and Gill tried to get home they could not do so by car. Looking back on that night, Gill said ‘It was quite an adventure and desperately funny, “especially as Bill was in his dinner jacket and I was in an evening dress and wearing high heels!”. Gill remembers that snow piled up as high as the top of the hedges on Llantrithyd Road and that to get milk the family used sledges to reach Tudor Davies’ farm at the Garn. She recalls that the milk lorries couldn’t reach the dairy farms but her family were at least able to enjoy very fresh, warm and creamy milk.

Gill is the grandaughter of Lord and Lady Baden-Powell, the founders of the Scout and Guide movements and has been an active member and participant in local, national and international events. 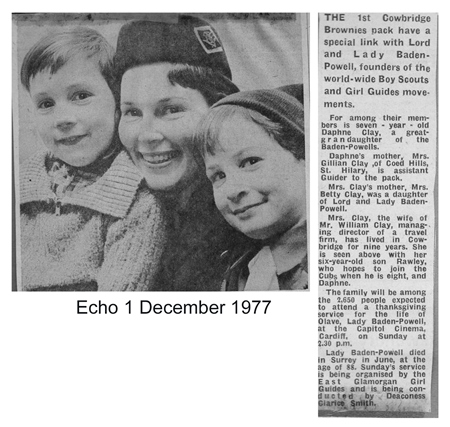 You can read more about the community at Coed Hills Rural Artspace’ on this website.

For more information on the history of houses and treasures in St Hilary and the area see  https://www.valeofglamorgan.gov.uk/files/Living/Planning/Policy/County_Treasures/Llanfair.pdf

Large, early to mid C19 house with substantial later additions. Formerly the home of the notable Glamorganshire antiquary The Revd. Montgomery Traherne, having been built for the Revd. George Traherne, Vicar of St. Hilary 1824-1853. Subsequently occupied by various members of the Traherne family in the second half of C19. Also the residence of Thomas Mansel Franklen, Clerk of the Peace for Glamorgan, and first clerk of Glamorgan County Council. He married Florence Allen of Pembrokeshire, was knighted in 1921 and lived at The Cottage until his death in 1928. The Clay family acquired the Cottage in the1930s.

We are grateful to Caroline Neudegg who met with Gill and Bill to capture their memories.