My mother and father, Ken and Edith Vaughan and I moved into 3 Hall Cottages in St Hilary in 1950. I was 2 years old. We moved from the Hunt Stables in Llandough, St Mary Church.

My Dad was born in Llanblethian in 1923. When he left school he did an apprenticeship as a carpenter and joiner. When the Second World War started he went into the Royal Navy until 1946. When he came home he took up his carpentry again and worked for Arthur Jones and sons the builder in Cowbridge. They were also under takers - that’s where he got his nickname Ken the box. Mum and Dad married in 1948 and we moved to St Hilary in 1950.

Then Dad got involved with the Bells. He eventually became the captain of the Bellringing (when Mr Lassiter retired) and taught many people in the village to ring. He also maintained the bells. On a Saturday afternoon he would make sure the bells were all in good working order for the Sunday Service. On Sunday evenings we would often walk over the downs to Cowbridge so that dad could join the Bellringers at Holy Cross Church. We also went out on Bellringing outings and visited other churches around Wales.

They always rang the bells on Christmas Eve, New Year’s Eve and any for weddings.

Some of the bellringers were Ken Vaughan (in the right hand photo above), Stan Frederick, David Jenkins, Denzil Griffths, John Frederick, Horace Lee, Bert Lassiter and Bob Baker. Bob lived in no 8 Church Crescent . He now lives in Aberthin. Apart from Bob the other men are sadly no longer with us.

In the early sixties there were not enough ringers so my Dad put the bells on the chimes. which meant one person could ring the bells, He taught me and Jill Thomas who lived in the village farm how to ring on the chimes. I don’t know if they still have the frame in the belfry. We would ring on a Sunday morning and sometimes for weddings. When Dad retired in the late eighties he would often be found in the church doing repairs.

Here details of who lived where:

Then there was the Bush Inn, which was run by Mr & Mrs Gwyn Evans. They had three daughter’s Gillian, Shirley and Lynda. In their day the Bush was always packed to the doors on a Saturday night. The village children would sit outside and their parents would buy them crisps and a bottle of ‘pop’.

Behind the Bush was a thatched cottage (now the pub car park). Mr & Mrs Evan Frederick lived there with sons John, Albert and Stanley. Opposite the Bush was Church Cottage where Mr & Mrs Jo Pope lived with their children Joe, Albert, Eileen, Len and Clive. Mr & Mrs Pope always held a party for the village children at Christmas, with Father Christmas there as well. Such lovely times. We also had a party every Christmas in the village hall.

Our vicar was Mr Crockatt. He lived where Mr & Mrs Colin Shaw now live. He had a daughter Muriel; she was a lovely lady. They had an orchard just below the vicarage where the children would ‘scrump’ the apples. The vicar would often catch us and in church the following Sunday he would point at us when saying the commandment ‘thou shalt not steal’ which terrified us.

We lived in Little Hall Cottage until 1954, then moved over to 5 Church Crescent when the old cottages were condemned. Mr & Mrs Power and Mr & Mrs Foreman moved as well. Mr & Mrs Jenkins were at number 3, Mr & Mrs Griffiths at number 2 and Mr & Mrs Frederick at number 1. Numbers 7 & 8 Church cottage were not built until later.

In the early 60s we had a youth club in the village hall run by Mrs Anne Jenkins. We would dance tour records and every so often we would have a village dance. Tom Jenkins played the piano, Terry foreman was on the drums and Les Jones on the fiddle. Viv Davies would sing ‘Diana’. Oh, for the good old days.

My dad liked his evenings at the Bush where most villagers knew him as ‘Ken the Box’. On a Saturday night my mother would join him. She had a good soprano voice and was often asked to get up and sing.

On 17 July 2016 Caroline wrote the following: I remember when our grandparents, Evan and Florence Frederick, moved from a beautiful thatched cottage (Rose Cottage) to the brand new 1 Church Crescent. It must have been 1956/7? They threw a load of stuff down the tips which I thought were in the wooded area, down the lane past the Bush and Kninkin. This area was called "Beverley Hills" by the villagers as the new houses being built down there were quite spectacular for their time. Rose Cottage was later demolished to make way for the rear car park of the Bush. I bet a lot of the things discarded by people down there would be worth a fortune now!

In April 2020, Caroline sent this photograph of herself, Jenny Hayward (nee Jenkins) who lived at number 3 The Crescent, and Judy the dog. Taken by the willow tree outside the village hall (late 1950s). It was sent in response to our call for villagers to hang a message on the tree for Easter as the village was in lockdown because of the Covid-19 epidemic. 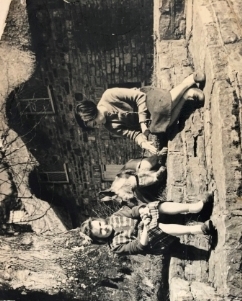 Rose Glover reported that the raised area the willow tree is on was known as the apple and pear by children growing up in the village in the 60s and 70s and was THE place to meet friends.

On 9 April 2020 we received a message from Christine Frederick saying Thank you for posting this. (picture of the willow tree outside the village hall) My Grandad, Evan Frederick, planted it after the old oak tree (which we called “the round tree” for obvious reasons) was cut down overnight and caused uproar with the established residents. He was a gardener around St Hilary. My grandparents lived at 1 Church Crescent and are buried in the churchyard, as are my parents. It is lovely that you are using it as a symbol of hope. 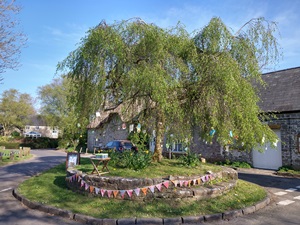