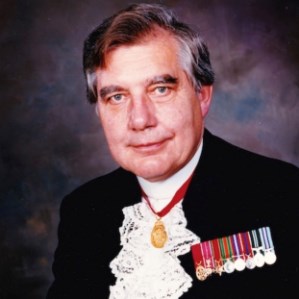 Bill Beaumont lived in Kelowna for several years until late 1989. He had a fascinating life and career – as you will discover as you read on.

Wing Commander Bill Beaumont parachuted from his stricken aircraft over the Ganges Delta just after the end of the Second World War, and survived for four days in the forest before being rescued.

In a varied later career he was a schoolmaster, clothing manufacturer and civil servant, holding the ancient office of Speaker’s Secretary in the House of Commons.

Beaumont’s ordeal began in August 1945, days after the Japanese surrender, when he was flying as a navigator with No 355 Squadron based near Calcutta. On a mercy drop to deliver supplies to newly liberated allied prisoners of war, his Liberator bomber suffered catastrophic engine failure and the crew were forced to abandon the aircraft.

Beaumont found himself alone and without food or water, marooned in the deep jungle and mangrove swamps of the Sundarban forests of the Ganges Delta, his parachute snared in a tree. He succeeded in constructing a small platform and survived on water dripping from the leaves.

True to his military training, he sprayed a patch of the surrounding jungle with his own urine to mark out his territory and protect himself from the wild animals in the area. Four days later he was rescued after a passing aircraft spotted his parachute. All the other members of the crew were also recovered.

William Anderson Beaumont was born in Leeds on 30 October 1924, and remained a keen Yorkshireman throughout his life. His family, originally Huguenot refugees, had been involved for generations with the textile industry and his grandfather, Robert Beaumont, was the first professor of textiles at Leeds University.

Beaumont was educated at Cranleigh School in Surrey and won a place to Christ Church, Oxford, to study history, but in December 1942 he joined the RAF Volunteer Reserve. After training in Canada he left for south-east Asia and joined No 355 Squadron. On leaving the RAF in 1947, he took up his place at Oxford.

Determined to become a schoolmaster, he went on to study for a Diploma of Education at Oxford, winning a distinction, and was recruited to teach at Bristol Grammar School. However, his teaching career was short-lived; in 1954 he was asked to take control of Beaumont and Smith the family worsted business in Pudsey, which he ran for the next 12 years.

He prided himself on helping to sell Yorkshire cloth around the world, first for Beaumont and Smith and later for Shipley-based Henry Mason, part of the Jerome Group where he worked as managing director.

For much of his time in Bristol and Leeds, he was a keen member of the Royal Auxiliary Air Force. In 1948 he joined No 3507 (County of Somerset) Fighter Control Unit, receiving the Air Efficiency Award in 1953. In November 1958, as a wing commander, he commanded No 3609 (West Riding) Fighter Control Unit based at Yeadon. For his services to the Royal Auxiliary Air Officer he was appointed OBE in 1961. In 1962 he joined the Royal Observer Corps and served for a further 13 years.

In a bold mid-life move, Beaumont gave up commerce and was selected for a late-entry post in the Civil Service. He worked for six years in the Welsh Office until lured to London for the job of Speaker’s Secretary in London, advising Speakers George Thomas and Bernard Weatherill, and running their office. He carried out this work with his customary tact and good humour. He was appointed CB in 1986.

When his first wife fell ill, he took early retirement in 1986 to look after her. In later life he helped with the selection of Civil Service candidates, served as vice-chairman of the Franco-British Society, and sat on the awards committee of the RAF Benevolent Fund for 17 years. In 1990 he became a trustee of the RAF Club and was chairman of the its Dining Society.

A man of wide general knowledge, Bill Beaumont appeared on the BBC’s Mastermind show with the waterways of England – he was the owner of a canal boat – as his specialist subject. While living at Richmond-on-Thames he also launched a very successful lunch club for the retired, the Nothing Club, which insisted on having no constitution or rules whatsoever.

Bill Beaumont married, first, in 1946, Kythe Mackenzie. She died in 1988 (the sign below is in the churchyard by a bush near the main door), and he married, secondly, Rosalie Underhill, who died in 2010. He left a daughter by his first marriage and two stepsons. 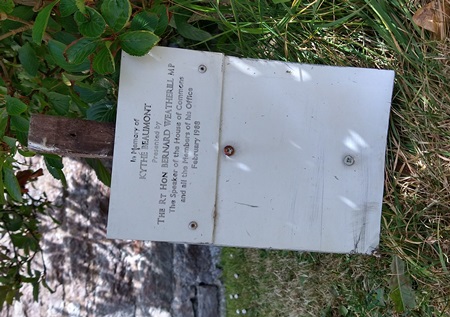